An associate at a corporate law firm is suing Airbnb and his supermodel host because the one-bedroom apartment he booked on Roosevelt Island—for $3,000 a month—didn't meet his expectations. Christian Pugaczewski spent one night in the apartment where he'd planned to spend the entire summer, dissatisfied with the building's empty cinder-block hallways that smelled like marijuana, holes inside the apartment, and a roach trap, among other concerns.

"There were holes in the floor," he told us Wednesday. "The stool legs were strategically placed in the holes. There were layers of grime built up on the window sills and the air conditioning units. There was a roach trap there too, so I assumed there was an infestation."

"I didn't stick around to find out," he clarified, "That was enough for me."

Pugaczewski, who splits his time between Los Angeles and New York City, says that based on the photos in the five-star Airbnb listing for a "Comfortable Spacious Island Retreat," he assumed the apartment he was renting was inside the luxury Riverwalk apartments. He also figured he'd found a deal—listings he'd been looking at in Midtown East and the Upper East Side, near his office, were between $4,000 and $5,000 a month.

"For me, I thought... nobody wants to be on Roosevelt Island, and I could just take the tram over and walk to work," he said, adding, "I think as every New Yorker eventually learns after being here, there's no such thing as a good deal in New York." 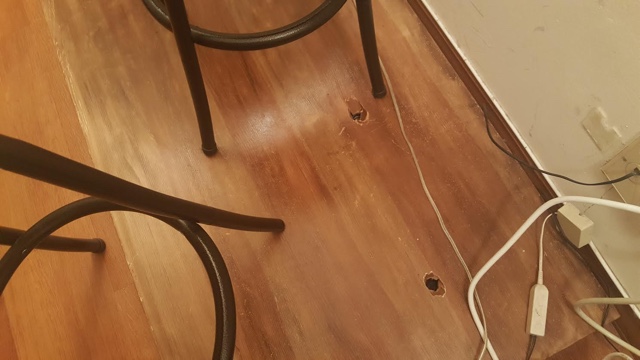 Documentation of the damage (via Pugaczewski).

When Pugaczewski arrived at the address—Roosevelt Landings, a seven minute walk from Riverwalk, according to Google Maps—he said he couldn't quite put his finger on the bad feeling. He'd already paid for the first month of his stay in full—just over $3,000. "It's hard to kind of identify what exactly makes something feel unsafe," he said. "But it was practically deserted, the hallways were all cinder-blocks, and you could smell marijuana in the common areas. It was not great." 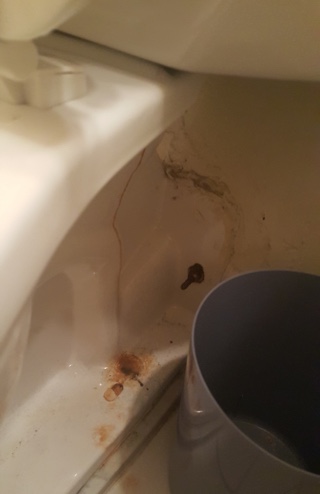 Roosevelt Landings—which includes 540 Main Street, where Pugaczewski had booked his stay—was built as subsidized housing for low-income seniors and the disabled, under the name Eastwood. It now has a mix of subsidized and market rate apartments, and advertises "fully renovated" units ranging from about $1,995 a month for a studio to $4,895 a month for a four-bedroom, according to Streeteasy.

"It was dark," Pugaczewski remembered. "There were some people hanging around the front entrance and it was not great. Just sort of loitering about. And it was kind of deserted except for those three people."

"I went into the apartment, I saw the condition, and I waited until sunlight and then split," he said.

Afterwards, Pugaczewski said that he was unable to get his $3,075 back, despite numerous calls to Airbnb and his host. He also said that Airbnb refused to let him leave a review on the apartment, arguing that he waived that right by canceling his stay. Airbnb did not immediately comment on this allegation.

"Roosevelt Island is a beautiful neighborhood in New York City, known for its sense of community, family environment and diversity—all traits I wholeheartedly embrace," Scott said in a statement. "I have always felt safe in my apartment and am proud to call Roosevelt Island my home."

"I acknowledge Mr. Pugaczewski's complaints and am working closely with Airbnb to ensure this is settled in a fair and just manner," she added. 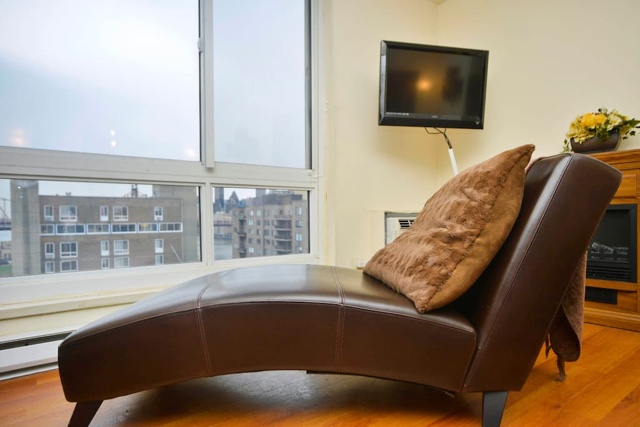 "It is not our policy to comment on specific pending litigation," said Airbnb in a statement Wednesday. "Millions of travelers have successfully used Airbnb to connect with hosts offering authentic local travel experiences. In very rare instances like this, we encourage guests to reach out to our 24-hour customer service helpline to resolve their issues promptly."

According to Airbnb's cancellation policy, "If the guest books a long term reservation and decides to cancel the reservation before the start date, the first month of the reservation is paid to the host in full and not refunded to the guest."

As for the rest of Pugaczewski's ill-fated summer, the associate said that he slept on a couch in New Jersey with relatives for two weeks until he found different accommodations—which ended up costing $20,000 for 10 weeks. He said finding the spot, in extended-stay corporate housing on 57th Street and First Avenue, was a "complete nightmare." His suit is demanding that Airbnb and Scott pay the $11,000 difference.

The state's Multiple-Dwelling Law prohibits New Yorkers from renting out entire apartments for under 30 days if the tenant on the lease is not present. It is not, however, illegal to list such rentals online—though legislation before Governor Cuomo is trying to change that. An Airbnb spokesman pointed out that this particular rental, which would have exceeded 30 days, was not illegal.

#airbnb
#roosevelt island
#Roosevelt Landings
#original
Do you know the scoop? Comment below or Send us a Tip