Cornel West, Hundreds Of Others Arrested In Occupy Protests Across Nation

The Occupy Wall Street protests which began in NYC just over a month ago went global this weekend—and across the nation, hundreds of protesters were arrested as cops clashed with demonstrators in Chicago, Phoenix, Denver and Raleigh. And in Washington D.C., Dr. Cornel West—who had appeared in solidarity with OWS protesters two weeks ago—was arrested at the Supreme Court steps. 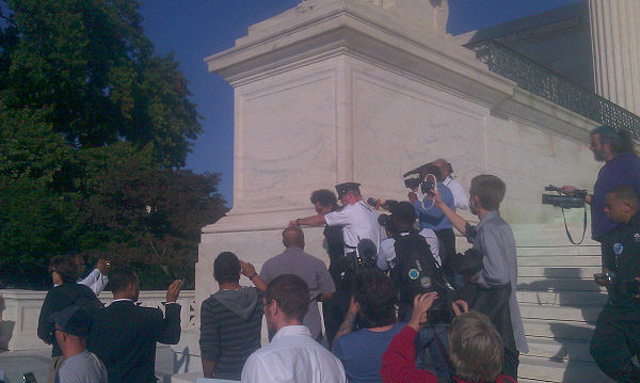 Chicago police arrested approximately 175 Occupy Chicago protestors in Congress Plaza just after 1 a.m. Sunday morning, after they had been warned they were violating municipal code. Protesters had assembled a tent city and formed a human chain while refusing to move from the park. Chi-town resident Joseph Eichler wondered why Mayor Rahm Emanuel wasn't more like a certain local hero: "I'd like to ask why (New York Mayor Michael) Bloomberg let the people stay in the park peacefully and clean up their own mess, and Rahm Emanuel won't let us do the same."

#arrests
#chicago
#Cornel West
#movement
#occupy wall street
#ows
#protests
#toronto
Do you know the scoop? Comment below or Send us a Tip