Cops Wound Suspect Who Fired At Them During Brooklyn Chase 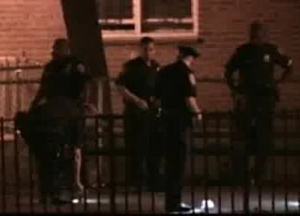 Two men were arrested after a police chase that also involved one man shooting at the cops. Early yesterday morning, at around 3 a.m., three plainclothes police officers heard shots near 2320 Linden Boulevard. They found that a 28-year-old man was shot in the stomach and saw another man—armed with a gun—fleeing the location.

The police officers, who identified themselves as cops, pursued the suspect. According to the NYPD, when they were crossing the street, the suspect turned around and fired at them. The two cops then fired back, hitting the suspect, Joseph Padilla, 20, in the right leg. They found a .32 caliber revolver "with five spent shell casings inside of it."

The 28-year-old victim was taken to the hospital in stable condition, while two of the police officers were treated for tinnitus and a leg injury.