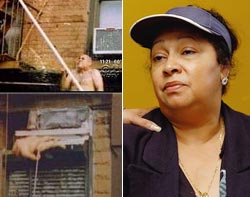 Olga Negron, who called 911 over concerns about his 35-year-old son Inman Morales's behavior only for him to fall to his death after being Tasered by the police, spoke out against the police yesterday. She said, "They could have done something better to protect my son. He didn't have a gun, a knife or any weapon. He was just sick. I want them to be held accountable. I want justice."

Yesterday afternoon, police admitted that the decision to stun Morales, who had been on a storefront ledge, holding a fluorescent light bulb while naked, violated department guidelines for Taser use which say "when possible, the [conducted energy device] should not be used…in situations where the subject may fall from an elevated surface." Police had called for an airbag to catch Morales, but it hadn't arrived when a lieutenant gave the order for another officer to stun Morales. Morales froze and then fell on his head, suffering injuries that later killed him.

A police source told the News, "It just wasn't a smart move. When you Taser someone, they drop like a stone. No muscle control. Under regular circumstances, the (suspect) could have jumped himself and been OK." The Brooklyn DA's office is investigating the matter, while Mayor Bloomberg said he was "not sure this was handled right." The lieutenant who gave the order was stripped of his badge and gun while the officer who Tasered Morales was assigned to desk duty. And the NY Times has a feature on how Morales was fine and seemed normal to his neighbors, but lately he started to act more bizarre.

#Inman Morales
#nypd
#Olga Negron
#stun gun
#taser
Do you know the scoop? Comment below or Send us a Tip