While the DOT is hard at work installing barriers at the bottom of the Williamsburg Bridge bike/pedestrian path in Manhattan, the NYPD is hard at work on the other side of the bridge writing tickets to cyclists. During yesterday's p.m. rush hour, a tipster sent us these photos of the NYPD issuing a slew of summonses. The offense? Riding the wrong way down a wide, sleepy half-block to get to the cyclist entrance to the bridge. The witness estimates that he saw "16-20 people" ticketed in twenty minutes, which seems hard to believe, but he tells us the offending cyclists were ordered to stand on line and wait their turn as the cops took care of business (literally).

"The NYPD is ticketing cyclists in front of my Williamsburg building, right at the base of the bridge's bike path on South 5th Place," our tipster writes. "It's a one way, and technically cyclists are directed to ride on the sidewalk against traffic if they're heading toward the bridge from points east. Few people actually know this. It's not well marked, and cyclists generally don't veer onto sidewalks spontaneously. Anyway, I thought given the confusing design of the bike path, that this is pretty evil."

We have several thoughts about this. First, cyclists who ride against traffic are often putting themselves and others in danger; in fact, there's a Ghost Bike memorial to a cyclist, Dan Valle, who died right near this spot (though we don't know if the fatality was caused by "salmoning"). So maybe the cops are doing them a favor? On the other hand, cyclists headed to the bridge from East Williamsburg and Bushwick might not notice the decaying sidewalk markers indicating that the sidewalk on South Fifth Place is a shared path for pedestrians and cyclists. Also, this street is short, wide, and not particularly busy—except for the bikers.

And, obviously, you can't ignore the fact that this cyclist crackdown has been a nice little revenue generator. We get it: the city needs money, and cops have quotas. But while the NYPD is out there ticketing cyclists at the entrance to the bridge like it's 2008, we wish they'd also keep an eye out for drivers doing this sort of thing. 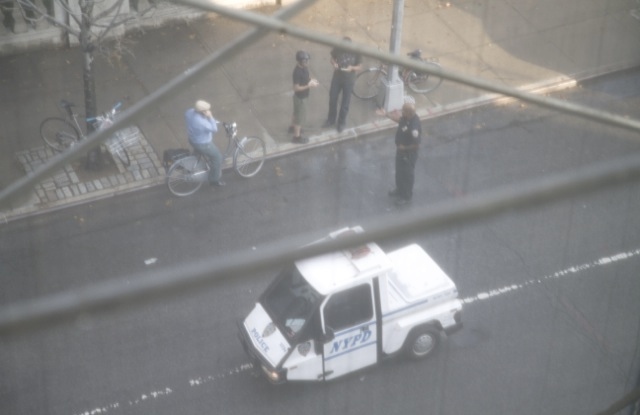 #bike lanes
#brooklyn
#cyclist crackdown
#cyclists
#dragnet
#nypd
#traffic
#williamburg
Do you know the scoop? Comment below or Send us a Tip