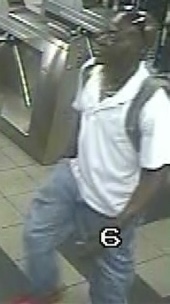 A child was struck by a lit cigarette last month at a Brooklyn subway station and now the authorities are hoping the police can help them find the subway smoker who did it.

The incident occurred at 9:07 p.m. on July 13, at the Crown Heights-Utica Avenue subway station at Utica Avenue and Eastern Parkway. Police say that an "unidentified male threw a lit cigarette, which struck the victim, a 4-year-old girl, in her chest."

The suspect then fled. The girl, who was with her mother, complained of pain and was taken to a nearby hospital.

The NYPD released an image of the suspect, who is wanted for reckless endangerment. He is described as being bald and wearing blue jeans, a white short-sleeve polo shirt, and red sneakers and carrying a backpack on his back.