Police are looking for a man who has violently robbed three women in separate incidents this month. 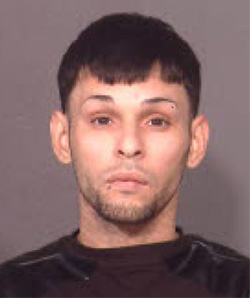 According to the NYPD, Gilrael Ruperto, 26, is behind these three robberies that occurred in the Bronx:

On Sunday, November 8, 2015 at approximately 7:50 p.m., the suspect approached a 68 year-old female on the third floor landing of a residential apartment building on East 156 Street and put a knife to her neck and demanded her bag. The suspect removed the bag, which contained $500 and fled.

On Sunday, November 15, 2015 at approximately 3:25 p.m., the suspect followed the 64 year-old female victim as she entered her apartment building on East 153 Street and proceeded to follow her into the elevator. As the victim exited the elevator on the 9th floor, the suspect grabbed her and threw her to the floor. The suspect then sprayed her in the face with an unknown liquid and struck her numerous times about the body with a closed fist. The suspect then removed the victim's bag, $50 in cash, and a ZTE smartphone.

On Tuesday, November 17, 2015 at approximately 7:45 p.m., the suspect entered the elevator with the 72 year-old female victim inside her apartment building on East 137 Street. When the victim exited the elevator on the 7th floor, the suspect sprayed her in the face with an unknown substance and threw her to the ground. The suspect then removed her purse and fled to parts unknown.

Ruperto is approximately 5'0" and 125 pounds. He also has a tattoo on the back of his neck.

Anyone with information in regards to this incident is asked to call Crime stoppers at 1-800-577-TIPS (8477). The public can also submit their tips by logging onto the Crime stoppers website at WWW.NYPDCRIMESTOPPERS.COM or by texting their tips to 274637 (CRIMES) then enter TIP577.

#attack
#bronx
#robbery pattern
Do you know the scoop? Comment below or Send us a Tip
A new Gothamist is coming! We’ve moved comments over to our beta site. Click here to join the conversation and get a preview of our new website.