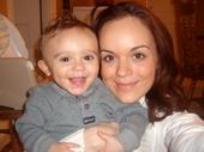 The police continue to investigate the Sunday shooting in the Bronx that claimed the life of an 18-year-old woman in front of her fiancé and their 1-year-old son. Chelsea Frazier's fiancé Carlos Cruz, 36, told his police they were fired upon when he struggled with a would-be robber, but Frazier's family question his version of events.

Frazier and Cruz were in the Bronx from Massachusetts, to visit Cruz's relatives. They pulled over on a street in Castle Hill to change toddler Alijah's diaper. Cruz claimed a man wanted his gold chain, and in an attempt to grab the gun, the gun went off and hit Frazier. A witness saw Cruz chase a gunman (Cruz was later shot in the leg) and other witnesses reported seeing another SUV speeding off.

An anonymous police source told the Times, "Much of that matches with what the living victim says." However, Frazier's grandmother Shirley Manthorne said the couple had been arguing over custody of the child (Cruz's cousin admitted they were "on and off). Manthorne wondered, “If this guy was really eyeing his chain around his neck, why didn’t he just say, ‘Here?’"

Update: Police have arrested Cruz and his cousin for staging the murder to look like a robbery. The Times reports that investigators believe when Cruz was chasing the shooter (really his cousin), he yelled, "Hey, you forgot to shoot me."

#Bronz
#castle hill
#crime
#fiance
#shooting
Do you know the scoop? Comment below or Send us a Tip