Yesterday afternoon, the police fatally shot a man they say was brandishing a knife at them. Detectives from the Upper East Side had gone to Darryl Battle's home at 650 Decatur Street to ask him about a bad check that was cashed for $1,000 at a UES bank (Battle left his ID; they first went to Battle's house on Thursday, but since he wasn't there, they left a card). 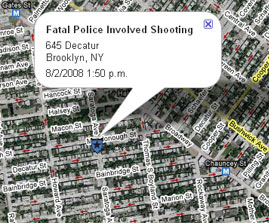 The Daily News spoke to a police source who said Battle was "very calm and cooperative," but became "intense" when the detectives made it clear they would keep pursuing the case. He allegedly excused himself to get a glass of water, but came back with an 11-inch kitchen knife. The NY Times reports that Battle originally agreed to go to the precinct with them, "but then he pulled a knife out of his waistband."

One detective was able to back out of the apartment, while the other was blocked, reportedly trying to get Battle to drop the knife. The detective fired once, when Battle was within 6 feet of him, and hit Battle in the torso. Battle died at Kings County Hospital. The police source told the News, "The detective was backed in the corner and unable to get to the apartment's only exit. When [Battle] got that close, he felt he had to fire."

However, Battle's relatives disagree with the NYPD's account. His niece said, "He was not running from them," and "He's not that kind of person.... He's a law-abiding citizen." The NYPD did release Battle's criminal history, which includes turnstile jumping, larceny, and criminal mischief. The Times suggests the detectives thought he might have been part of a larger check fraud scheme.

City Councilman Charles Barron has asked for a thorough police investigation, noting Battle let the police in, and the Reverend Al Sharpton has spoken to the Battles and will monitor the situation.