State, local, and federal cops swarmed a Bronx heroin mill on Thursday afternoon, arresting nine people and seizing about a million baggies of heroin and $350,000 cash.

"The volume of heroin packaged for sale in the three-bedroom house in the Bronx is staggering," Special Narcotics Prosecutor Bridget Brennan said. "Investigators estimate that they seized more than a million user-ready glassines meant to flood our region with this deadly drug." 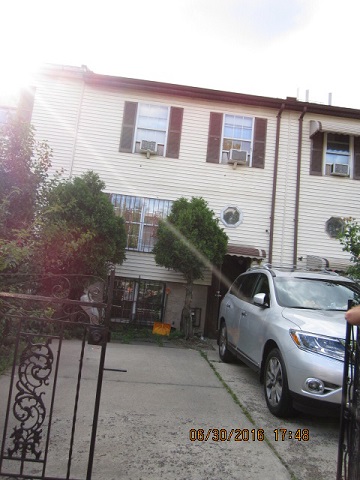 The Harrison Avenue house that prosecutors say operated as a massive heroin mill. (Office of the Special Narcotics Prosecutor)

New York Drug Enforcement Task Force agents and Office of the Special Narcotics Prosecutor investigators were staking out a row house on Harrison Avenue in University Heights at about 3:30 p.m. when they saw two men leaving the house carrying a gym bag and a plastic bag, according to the authorities. Officers stopped the pair up the street and found about $50,000 in the bags, they say. Cops arrested these men, and stopped a third who came out of the house.

Other officers walked up to the back of the house and say that as they were about to knock on the door, several people ran out and tried to climb the fence and escape. Officers detained three of these men.

Police claim that the back door of the house was left open and that cops went inside "to secure the residence," and found a large heroin mill operation inside, along with three people hiding in different parts of the house. The authorities say the officers waited for a search warrant before taking inventory of the dope-packaging operation in the basement. Cops seized about a million baggies of heroin weighing about 64 kilos, $300,000 cash, grinders, packaging material, and face masks.

Some of the heroin was in suitcases, and some wrapped in packages organized by brand name, listed with stamps on the individual bags announcing names such as Red Bull, Priority Mail, 9 Plus, Speed Limit, and Sweet Dreams, according to an announcement.

Prosecutors say one of the people caught up in the sweep was arrested at another Bronx heroin facility less than four months ago and was out on bail.

The suspects are supposed to be arraigned today.