Police are searching for a man who assaulted a passenger on the 7 train on Sunday. A witness who broke up the incident said the suspect had been directing anti-immigrant, anti-Mexican rants at the Hispanic victim. 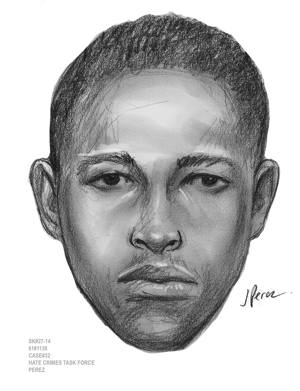 Sketch of the suspect (DCPI)

An NYPD press release states that around 4 p.m. on February 23, the victim, a 43-year-old Hispanic man, was approached by the suspect, described as a black male, who punched him multiple times while making anti-Mexican statements. The attack stopped when another passenger, Erik Baard, intervened. The suspect then fled at the Queensboro Plaza station.

Baard, 45, a writer and community advocate, tells us that he was on the train headed to Jackson Heights with a friend and they happened to be sitting across from the men. The victim and the attacker were separated by one subway seat. "I saw no motion and heard no interaction between the two," Baard told us. "Suddenly the African American man was on the Latino man and delivered three quick rabbit punches to his face and neck."

While other passengers scattered away, Baard found himself "just suddenly there arched over the two and the assailant saw me over his shoulder and jumped off of the victim...I didn't decide to be brave." He added, "I'm a bit large so that might have been a factor."

According to Baard, the attacker complained about "Mexican snots" and claimed that the victim had wiped phlegm on him, "H   e launched into anti-immigrant tirades and repeated a few ways that he was a citizen.      He gestured that he was armed. There was definitely an object in his waistband."

The attacker also allegedly said, "I don't have to take that!" and continued ranting, so Baard says he replied, "Sir, no one is saying you have to take anything. I'm just asking you to ratchet back the violence," and "All I'm asking is that you ease back from violence." The attacker told him, "I'm not a violent man... These Mexicans think they can come to this country and treat an African American citizen this way" ." 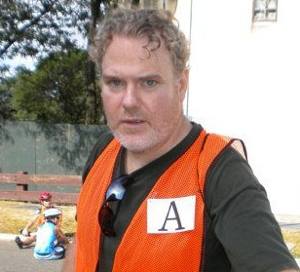 The victim never got up or fought back—"He was stunned," Baard said, "He didn't cry at being punched but he teared up at the hate speech." Baard asked him if he wanted to call 911 and offered to call 911 for him, but it turned out another subway passenger called 911.

That passenger, a young man attending Laguardia Community College, described the assailant and victim in detail to the cops.

A person who said they were also on the subway car offered a detailed description of the attacker on LICPost, saying he's about 6', 170 pounds, wearing black Timberlands, dark blue jeans and a pea coat. He also has a "noticeable birth mark on the left side of his face" and "walks around carrying a wooden hairbrush." Baard said that the suspect had "stroked his face with [the brush] after running it across his very short hair. In retrospect it seems like he was soothing himself."

Anyone with information in regards to this bias assault is asked to call the NYPD's Crime Stoppers Hotline at 1-800-577-TIPS. The public can also submit their tips by visiting the Crime Stoppers website or texting tips to 274637(CRIMES), then enter TIP577.

About his instinct to try to stop the assault—and not fall prey to the "bystander effect" where onlookers don't help people in need—Baard said, "There's an alternative to responding with violence or cowering. Standing strong, talking it out, and listening can still work in the craziest of situations." Baard was expecting to be reprimanded by the NYPD for stepping in, but a detective told him, "You know, you might have saved that man's life."

#7 train
#bias assault
#erik baard
#hate crime
#original
Do you know the scoop? Comment below or Send us a Tip