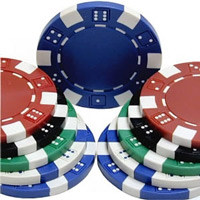 Cops are now searching for the three gunman who apparently killed a New Jersey man by accident during a Friday night Flatiron poker club robbery. Fifty-five-year-old Frank Desena was declared dead at St. Vincent's Hospital shortly after he was shot in the abdomen during the robbery. Initial reports said that Desena was shot when one of the gunmen was picking up his sawed-off shotgun, which he'd dropped. Today, the New York Post is saying that Desena was shot by the gunman's pistol, which he fired when picking up the shotgun.

Witnesses described the three gunmen clad in black screaming "Everyone get down on the f---ing floor!" After forcing their way into the club on 5th Ave. near 28th St. at gunpoint, the robbers started beating the cashier who exchanging passengers cash for chips. The Post wrote that the bandits made off with approximately $100,000, although The New York Times reported that police wouldn't specify how much was taken from the club.

Desena was a Queens native with degrees in business, computer science, and philosophy. Most recently, he taught mathematics at Stevens Institute of Technology in Hoboken, NJ. He apparently also once entered the Las Vegas World Series of Poker. His brother-in-law said, "It was just wrong place, wrong time...He was just an honest, law-abiding, go-to-work-every-day, care-for-his-family kind of guy."

Cops believe that one of the robbers responsible for Desena's death may be a former gambler at the club, which has been open for less than two weeks. And while poker clubs are not illegal, it's illegal for the clubs to take a share.