Gunfire broke out in the heart of Greenwich Village on Wednesday night, in Washington Square Park. Police believe the shooting may have been sparked by a drug deal gone bad... or romantic jealousy.

Around 11:15 p.m. on August 31st, the NYPD says officers received a report that a male "displayed a firearm inside Washington Square Park, and fired a shot towards the 29 year-old male victim. The victim was struck by a concrete fragment that was sent into the air when the round struck the pavement."

The victim was not injured and refused medical attention, according to the police.

The Daily News offers a dramatic version of events, which suggests that the suspect and victim "had been arguing for the last few days — ever since the suspect had made a pass at the victim’s girlfriend," with their clash culminating in the victim daring the suspect to shoot him, saying, “Go ahead ... just tell my mother I love her." From the News' sources:

The gunman struck his victim twice in the head with the pistol, then pressed the muzzle against the man’s chest, threatening to shoot. After the victim stared him down and told him to pull the trigger, the gunman pulled back and aimed the weapon at the man’s legs, officials said.

He fired one round, which hit the sidewalk. The victim was hit with a concrete shard when the bullet impacted with the ground, cops said.

The Post uses the shooting to revisit its past reports about the "open-air drug market" in the park, and offers a more lurid explanation:

The gunman approached his 29-year-old victim around 11:05 p.m., accusing the man of selling him fake narcotics the day before, police sources said. An argument ensued, and at one point, the assailant asked for oral sex from the dealer’s girlfriend, who was also in the area, as retribution for the phony drugs, sources said.

Police released images (below) of the suspect, describing him as about 5'5" and 25 years old. 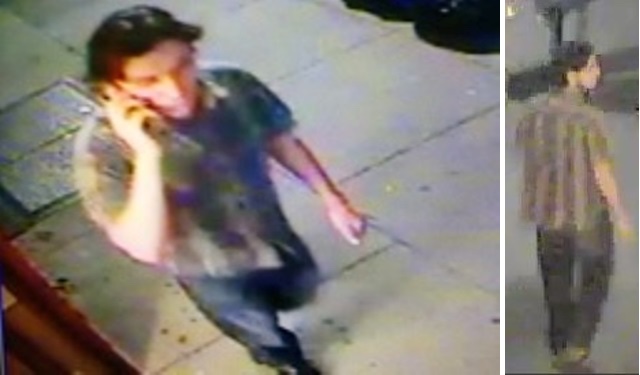 Anyone with information in regards to this incident is asked to call the NYPD's Crime Stoppers Hotline at 1-800-577-TIPS (8477) or for Spanish, 1-888-57-PISTA (74782). The public can also submit their tips by logging onto the Crime stoppers website at WWW.NYPDCRIMESTOPPERS.COM or by texting their tips to 274637 (CRIMES) then enter TIP577

#assault
#gun violence
#shooting
#washington square park
Do you know the scoop? Comment below or Send us a Tip
A new Gothamist is coming! We’ve moved comments over to our beta site. Click here to join the conversation and get a preview of our new website.