All the dirt on former CBS 2 news anchor Rob Morrison's marriage to CBS MoneyWatch anchor Ashley Morrison is coming out. Last Saturday Morrison was charged with choking his wife in his Darien, CT home; police say he had threatened to kill her if they let him free—prompting a judge to forbid him from being within 100 yards of her. Now they revealed that he was arrested last month for choking Ashley Morrison so hard that she nearly passed out.

Apparently Rob Morrison had contacted the police on January 20th to "file a report against his wife for violence against him." According to the Post:

But when cops arrived at the home, Ashley told them he had tried to strangle her during the dispute, the police report said. Ashley claimed a drunken Morrison had been videotaping her on his iPhone during an argument over his heavy drinking at a dinner party.

Ashley told Morrison she was “uncomfortable” with him taping a “personal” conversation, the report said. After he refused to stop, she tried to grab the phone away and he threw her to the floor, she told police. Morrison “kept telling her to get up,” the report said. She did and went to call cops on another phone.

But before she could dial, Morrison threw her into the dining room and choked her “until she almost passed out,” the report said.

She said the choking occurred while she was facing the wall, and Rob, who is an ex-Marine, had his right arm around her neck, police said. Ashley began hitting him in the head with a portable phone. At this point the couple’s nanny came downstairs and Rob ordered her back up, the report said. Ashley asked her to stay, because she was scared of Rob after he had choked her and thrown her to the ground.

The incident ended, Ashley said, when Rob said things have gotten out of hand and they needed to calm down. Ashley gave police a sworn written statement, although she later retracted it, claiming the pair had a difficult week and they were both intoxicated and upset which made her exaggerate the event. She said she also couldn’t remember if she was thrown to the ground or she merely fell, the report stated.

Ashley Morrison's mother told the Daily News earlier this week that her son-in-law had been abusing her daughter for years. The NYPD had arrested him once when they lived on the Upper West Side and had been called to their apartment numerous times (mostly when Ashley Morrison was complaining about him but once when Rob Morrison accused Ashley Morrison of being the aggressor). 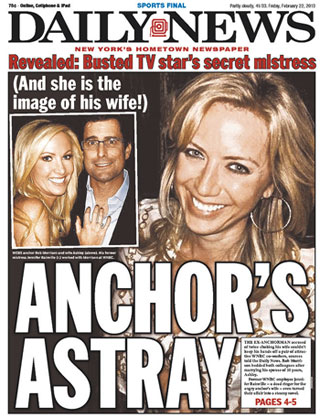 Today, the Daily News details how Rob Morrison allegedly had affairs with two colleagues at WNBC. He had worked at Channel 4 until 2008 (it's rumored that he left after Ashley Morrison emailed management, accusing them of covering it up). One of his alleged girlfriends is actually his ex-fiancee, Jennifer Rainville, who the News says is the "spitting image of his shattered spouse." Rainville wrote a book "about a hard-drinking, philandering anchorman working in Manhattan, the source said." Here's how Rainville describes her novel, The Trance of Insignificance:

On a cold January morning, just as Jules Duvil is finishing her shift as a producer at NEWS 30, she makes a spontaneous decision to grab a beer with Jack, the hunky anchor of the station’s top-rated morning news program. It is a decision that will shake both of their lives forever. Soon, Jules and Jack become entangled in a torrid and tumultuous romance, so intense it ends up tearing them apart.

Seven years later, Jules has a life beyond what she could’ve ever imagined having grown up in a run-down duplex in South Boston. She lives in a beautiful townhouse in the West Village with her handsome husband and is on the verge of publishing her first novel. But a call from Jack sends everything spiraling. This time the decision is a serious one - Jules must choose between the life she always wanted and the only man she ever truly loved.

The News reports: "After the birth of his now 7-year-old son, Morrison would drunk-dial Rainville late at night and leave sappy messages of regret. 'I made a huge mistake' or 'I need to see you' were among the voice mails left by Morrison — and played for the source by Rainville."

When asked about his alleged extramarital wanderings, Morrison told the News, "Why would I say anything? So unless you want to talk about the Bruins or the Grateful Dead, I’m done bro."