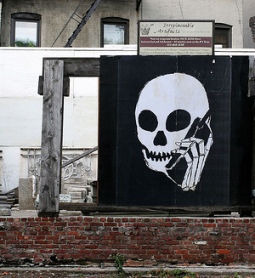 Since cellphone technology is just about commonplace there days, the police and prosecutors are relying on cellphone data to help build cases against suspected criminals. The NY Times looks at how more and more cases seems to involve cellphone data.

The data, collected from transmission towers, can help suggest where a suspect is during the time of a crime. The Times leads with an example from the trial of Paul Cortez, accused of killing his ex-girlfriend Catherine Woods in her East 86th Street and 2nd Avenue apartment. The Times has a map and timeline, showing a progression of calls captured by cell phone sites that end up being closer and closer to Woods' apartment near the of her death. A jury eventually found Cortez guilty.

Cellphone records are also being used in the case against Darryl Littlejohn, who is accused of killing John Jay graduate student Imette St. Guillen. His lawyer Joyce David calls cellphone data "another arrow in the quiver," and will be challenging the data. Defense lawyers point out that cellphone transmissions can be pushed to other towers during heavy period and have begun to use cellphone data to prove their clients are innocent (or at least that they have alibis).

If you think, "Hey, maybe criminals just shouldn't use cellphones," Manhattan DA's chief of investigations Daniel Castleman told the Times, "For the most part, people don’t think about those things. Organized crime figures have known for a long time that we can tap cellphones, and yet they continue to talk on them. It’s just human nature.”