Cops Pull Man With Prosthetic Leg Out Of His Wheelchair, Arrest Him On Coney Island Boardwalk

Two white shirt police officers pulled a disabled man out of his electric wheelchair and arrested him on the Coney Island Boardwalk on Friday night. According to witnesses, he and his companions were targeted for drinking in public.

Locals said that the man, who has a prosthetic left leg, plays conga drums on the boardwalk several days a week. He and his friends gather in front of the public beach bathrooms at West 16th Street, across from the B&B Carousel.

"They're always here, drinking, the same spot all the time," said another witness and local resident, who did not provide her name. "They drink and you know, play salsa music and play their congas and stuff like that. [The cops] have been harassing because they don't want people drinking."

Officers approached the man, whose name could not immediately be confirmed, shortly after 8:00 p.m. This reporter witnessed the encounter escalate. Two officers in white shirts grabbed his arms, at one point pinning his left hand to the ground. The same officers then pulled him from his wheelchair onto a metal chair nearby, holding his hands behind his back. A crowd gathered—the boardwalk was full of beach-goers—and several more blue shirts and at least one undercover came to the scene, telling witnesses to move back.

During the encounter, the disabled man demanded that the officers remove their hands from him, and simply issue him a summons. He can be heard on the Periscope video saying, "[Inaudible] motherfucker, give me a summons."

"This is not the first time they target him, and he's in a wheelchair," said another witness, who declined to provide her name. "They've been after him for a while. For what reason, I don't know." 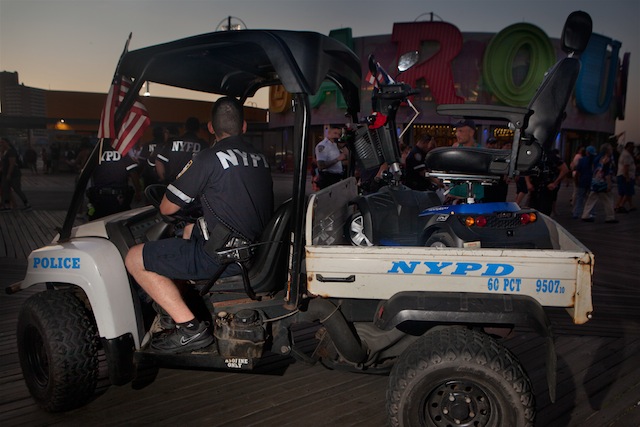 Cops take the disabled man's electric wheelchair from the scene (via tipster).

Four officers escorted the man to a patrol car, walking on his prosthetic leg. "He can't really walk and they're trying to make him walk right now," Mazz said. "They got him out of his wheelchair, now they have him walking, and it looks like they're going to arrest him."

According to Mazz, the cops told the arrestee that he was being charged with disorderly conduct. However an NYPD spokeswoman said Saturday that no such arrests were made on the boardwalk on Friday night.

A 48-year-old man was arrested and charged with smoking marijuana in public view, a misdemeanor, at the Boardwalk and West 16th Street at 8:25 p.m. on Friday. The time and location track with disabled man's encounter with police, but the department could not confirm whether this arrest was the same as the encounter captured on video.

After the man was taken from the scene, officers proceeded to rummage through bags and other items belonging to the small group of people still sitting and standing along the restroom wall. Cops loaded up the wheelchair and drove it from the scene.

Witness Max Thorn, 26, approached the scene after the arrest. "[A white shirt] accused the people there of getting drunk every day, made a grand pronouncement that he’s going to begin enforcing alcohol violations, and then went ruffling through their things, up against the wall and underneath their folding chairs and what not," he recalled via g-chat on Saturday. "He picked up a black plastic bag, pulled out a tall boy of Coors with a flourish, and then turned it over—but hardly any beer came out."

Another witness, who declined to provide her name, described the man as "just a friend on the boardwalk."

"It's not that the person was selling anything [illegal]," she said. "The person was just there. He was just sitting in his chair."

She added that the man "has an issue" with one of the white shirts that arrested him, and claimed that he had been "roughed up" by cops in the past.

"He's not a bad person," she added. "He's a nice person. He likes to play conga. He wasn't doing nothing bad, nothing wrong. Why'd they rough him up like this? It's not like he was selling weed. He was just there."

#arrest
#coney island boardwalk
#nypd
#Prosthetic Leg
#wheelchair
#original
Do you know the scoop? Comment below or Send us a Tip