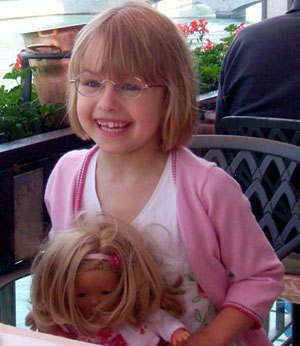 More details have emerged on yesterday's arrest of Clark Rockefeller, whose wife divorced him after learning that his claimed membership in the Rockefeller dynasty was totally bogus. Rockefeller allegedly abducted his daughter last Sunday from a street in Boston; yesterday afternoon the FBI arrested him and took the daughter (pictured) into custody unharmed.

The Boston Globe reports that a "concerned citizen" informed authorities that Rockefeller was holed up with the 7-year-old girl in a Baltimore apartment. They also learned that Rockefeller kept a boat in a nearby marina, and lured him outside by placing a call to the apartment and telling him that his 26-foot catamaran was taking on water. The girl was found inside the apartment shortly after Rockefeller's arrest.

Rockefeller's ex-wife, Sandra Boss, reportedly "collapsed with joy into Deputy Superintendent Tom Lee's arms" when she learned that her daughter was found. She is to be reunited with the girl today; her ex-husband faces charges of felony custodial kidnapping, assault and battery, and assault and battery with a dangerous weapon. The police and FBI are still trying to determine his actual identity.

#abduction
#arrest
#captured
#Clark Rockefeller
#fbi
#kidnapped
#Reigh Rockefeller
#rescue
Do you know the scoop? Comment below or Send us a Tip