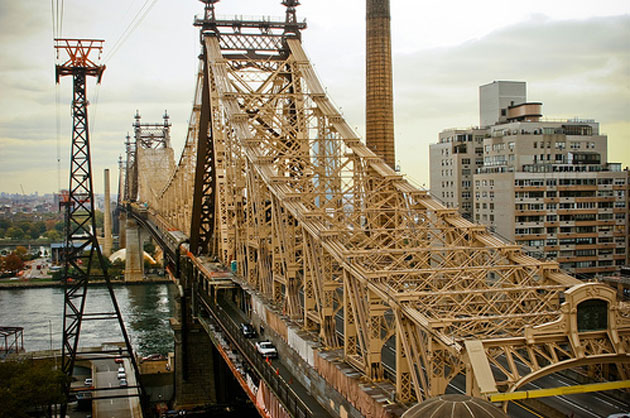 Cyclists are complaining that NYPD squad cars have been parking on the Queensboro Bridge bike path, forcing riders to pass by through a narrow 18 inch gap. A DOT spokesman explains they requested police presence on the bike path after two collisions between cyclists and workers painting the bridge. In areas where work is being done, there are signs posted "periodically" instructing bike riders to dismount and walk.

But the work is actually being done on the bridge's trusses high above the roadway, and cyclists tell the Daily News that there's nobody working on the bike path itself. An NYPD spokesman contradicted the DOT statement, stating: "We don't know of a car being assigned there." Bike commuters, however, tell a different story. Cyclist Jorge Ramirez says, "When I was coming over, I saw the car. I thought it was coming my way, so I started to slow down. As I got closer, I noticed that there was nobody sitting in the car."

And here's a real kick in the teeth: An unidentified Brooklyn photojournalist recalls that as he reached the midspan of the bridge on his bike, an officer on a scooter was there ordering riders to walk their bikes back to the foot of the bridge and start over. NYPD squad cars have also been stationed on the Williamsburg Bridge pedestrian/bike path in recent weeks, eliciting complaints from cyclists because they've been parked around a blind corner. One Gothamist commenter says that after nearly crashing into the car, the officer explained that they were there for "safety" during the Jewish holidays.