An NYPD officer who got into a shootout during a foot pursuit on the Lower East Side was saved by his ammo belt early this morning. The gun battle outside the Baruch Houses erupted at 1:44 a.m. after Officers Thomas Richards and Thomas Dunne approached a man who was acting suspiciously on Columbia Street. Police sources tell the Daily News the alleged perpetrator, Luis Martinez, 25, "muttered something, turned toward Richards and opened fire." One of the rounds struck the spare ammunition magazine on Richards's gun belt. 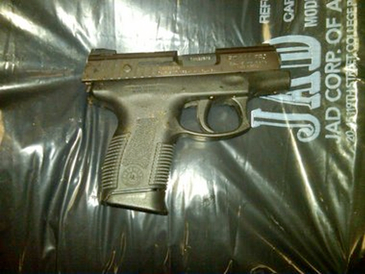 “An inch either way, it would have been right in his stomach,” NYPD Commissioner Ray Kelly told WOR-AM this morning. "A miracle. We're happy about that, but it's just an indication of what officers face on a daily basis." The officers chased Martinez for several blocks, returning fire and hitting him in the leg.

He briefly evaded police, but the AP reports that Emergency Service Unit officers followed the suspect's blood trail to his apartment, and Martinez was taken into custody there. (His 9mm handgun was recovered from a trash compactor.) Martinez was listed in stable condition at Bellevue Hospital, while the cops were examined and released from Beth Israel Medical Center. "It was a very close call for Officer Richards," Kelly says. "The magazine may have well saved his life."

#baruch houses
#guns and ammo
#Lower East Side
#shootout
#shot cop
Do you know the scoop? Comment below or Send us a Tip