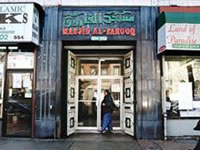 Mayor Bloomberg's personal security detail was temporarily increased in recent weeks, and security officials were tracking the source of a possible threat against his life made by an American-born New Yorker and Muslim convert named Edwin Thomas. According to WNBC, intelligence officers kept tabs on the man for weeks, finding out that he had a history of mental illness and concluding that he was not capable of following through on his threats.

Police first learned of Thomas when they heard from the Al Farooq mosque on Atlantic Ave. in Brooklyn, which the Daily News reports gained a reputation for radicalism in the 1990s and following 2001. Thomas prays at the mosque frequently and began to solicit help from other members to carry out his idea of killing Mayor Bloomberg.

Members of the mosque characterized him as a nut and notified the police of Thomas' nascent plans. Twenty-eight-year-old mosque member Mohamed Houras said Al Farooq is frequently a destination for such people: "They come in all the time. These guys go to jail, convert and then show up at the mosque with plots. They talk jihad, but they're out of their minds. Of course we call cops."