New York Black Lives Matter activists are angry at a Queens NYPD cop over social media posts he made, including one of a shirt that reads I Handcuff Protesters (with "OT" bolded, for overtime) and another of a meme implying he's tempted to "pop off rounds" on his beat "like the rest of the hood rats." The officer, whose last name appears to be Langone, and who appears to work out of Jamaica's 103rd Precinct, made his account private, then shut it down after activists began publicizing his posts on Twitter.

Among the posts that people took issue with were these:

Officer Langone of the @NYPD103Pct doesn't think much of free speech, except of course as "OT." pic.twitter.com/SGODDv8Nwh

To be clear, this appears to be an active duty cop w/the @NYPD103Pct posting this filth: https://t.co/gABdz1zpHj pic.twitter.com/zq9bSlGfNB

And when activist Keegan Stephan named the precinct in registering his objections, the person managing the account blocked him:

Stephan said he's seen this kind of rhetoric from cops before, but the implications of a shirt boasting about cuffing demonstrators as a money-making venture got to him.

"The shirt and the fact that this NYPD officer is wearing it proudly bothers me as an activist and someone who is invested in democracy," Stephan said. "It’s not about protecting free speech, it’s about overtime and making arrests."

Their interest piqued, Stephan and others pored over the postings and found, according to Stephan, "he's talking about a lot of the communities he works in as if he’s in the jungle or a sort of war zone." Stephan said that far from wanting to punish Langone individually, he sees him as indicative of a problem that protests are agitating around. "That’s so typifying of these white police officers who live in Long Island and this is how he views the community he works in."

As Stephan says, this sort of rhetoric by NYPD officers is not entirely uncommon. In fact, the anti-protest shirt is a hot item for its maker, Off Duty Outfitters, according to Instagram posts by the company. Langone, it seems, simply had the poor judgement of posting these things to a public account and the bad luck of having anti-police-brutality organizers notice it.

Off-Duty Outfitters is interesting in and of itself, catering to cops and supporters with provocative shirts, stickers, and accessories with a keen design sense. The company takes orders via direct messages and Paypal and at least one of the people running its Instagram account appears to work out of the 103rd Precinct as well. Sprinkled between photos of shirts bearing slogans like, Running Toward, Never Away, and FDNYPD, photographed with guns and handcuffs laid over them, are anti-welfare memes and posts complaining about old police computers, calling Black Lives Matter a terrorist group, questioning climate change, challenging President Obama's handling of terrorism carried out by Muslims, and mourning murdered police officers.

One sticker protesting the 1 percent raise for rank-and-file officers' new contract looks like this: 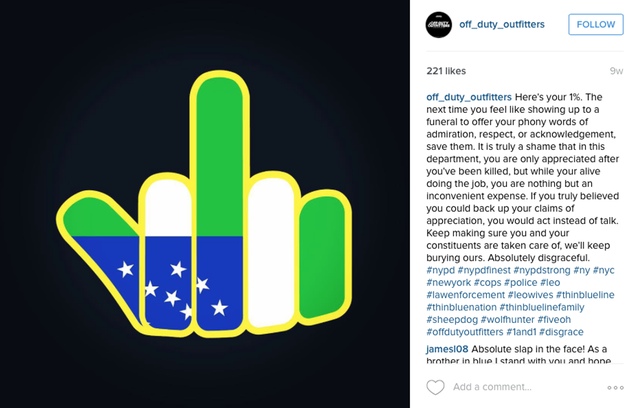 Trade in these kinds of confrontational messages is nothing new. Police officers nationwide have gotten themselves in trouble for antisocial sartorial choices, including one in Queens whose shirt professed love for "the hunting of man." In fact, Off-Duty Outfitters has revived "We own the night," the catchphrase of the now-disbanded plainclothes Street Crimes Unit, and paired it with a charming Punisher-like skull (wearing a cop hat!) and some baseball bats. In New York, such attire violates a policy against unapproved apparel identifying the wearer as a cop. 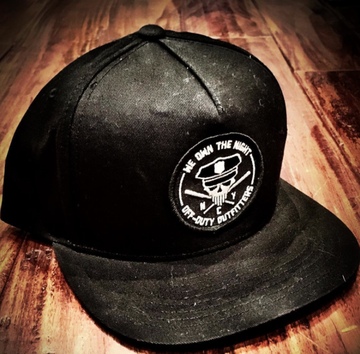 Still, the shirts and caps exist, and it's possible to hear the same sentiments expressed nightly in bars—Farrell's, for instance. Lately, though, officers' online postings have been coming back to bite them.

In 2013, after outcry over, among other things, a Facebook page about the West Indian Day Parade where officers wrote things like, "Let them kill each other," then-police-commissioner Ray Kelly updated the department's social media policy to restrict officers' posting of photos of themselves or other officers in uniform, and to emphasize the importance of professionalism, courtesy, and not yelling one's prejudices from the rooftops.

Another officer we encountered in researching this article, Anthony Morales of East Harlem's PSA 5, seems not to have gotten the memo. In addition to numerous photos of himself on-duty, including one that shows his badge number, he uploaded this: 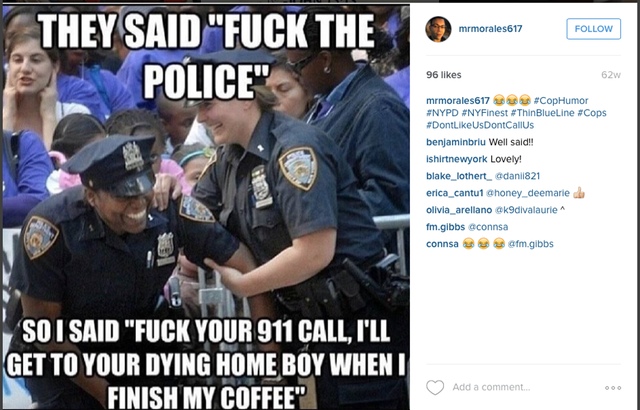 Another meme, apparently from before he became an officer, suggests that he was familiar with the idea of police racism before he started sharing memes like (not pictured) "If Black Lives Matter Why do so many of you kill each other?" 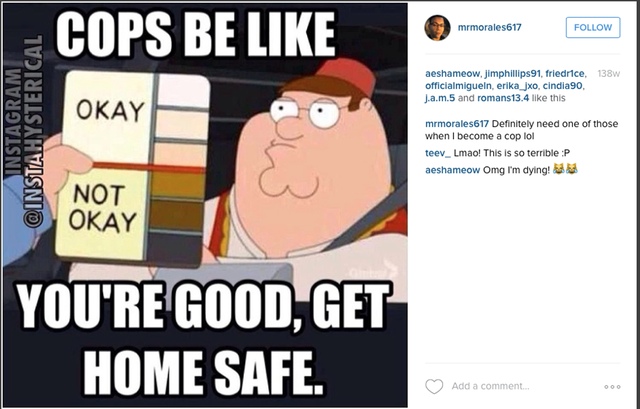 Responding to another officer's Instagram posting of the meme "Plan of the day: 1. Get home safely 2. Try not to end up on YouTube," Morales wrote, "Cop Watch guys love me on YouTube." One committed chronicler of police in East Harlem indeed has several clips of Morales, though the narration is hardly loving. Asked about the "fuck your 911 call" sentiment, Stephan said Morales and those who agree with him miss the point of the protests.

"I don’t think that is the sentiment in the Black Lives Matter movement," he said. "People want community control of the police, to have police take care of them so it’s not something for them to worry about. It's a pretty big leap [in logic] for a police officer to say they're not going to do their job because one group of people are asking for police reform."

After Langone's posts, someone posted what is supposedly his phone number and address online with this message:

Keep fucking with us. This is a message to cease and desist all further inference of first amendment rights of the citizens of NY/NYC. #ANONYMOUS #BLACKLIVESMATTER #ERICGARNER #FTP

Stephan said it's not his goal to target Langone individually, saying, "The problem is not this dude. I don’t hate this guy. He also posts a lot of pictures with his wife, and he’s probably a nice guy to people he gets to know. But there’s an institutional problem."

Members of the service utilizing personal social media sites are to exercise good judgment and demonstrate the same degree of professionalism expected of them while performing their official duties. Members of the service should be aware that activities on personal social media sites may be used against them to undermine their credibility as members of the Department, interfere with official police business, compromise ongoing investigations and affect their employment status with the Department.

Queens Councilman Rory Lancman, whose district includes Jamaica, issued this statement in response to our story:

I’m deeply disturbed by the reprehensible Instagram posts of a police officer in the 103rd Precinct, which covers a significant portion of my district. It’s completely unacceptable for someone who has sworn to protect our city to post messages advocating violence and referring to community members as "hood rats." Such comments erode public confidence in our police and undermine our efforts to improve police-community relations. I urge the NYPD to take immediate disciplinary action and make it clear that such behavior will not be tolerated.

#being smart on the internet
#black lives matter
#nypd
#police brutality
#police misconduct
#social media
#original
Do you know the scoop? Comment below or Send us a Tip