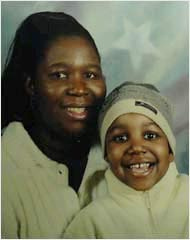 The NYPD detectives working the homicide investigation of Carol Simon have identified a suspect in her killing, although they are not publicizing his identity. Simon was shot as she was returning to her car where her son was waiting for her at a gas station. The killing occurred Saturday evening in the Crown Heights neighborhood of Brooklyn, as an argument between two men turned violent and one of the men pulled a gun.

Neighbors and co-workers of Simon, who was a nurse's assistant at Brookdale University Hospital, are reportedly devastated and a fund has been established to return the 35-year-old mother's remains to her native Grenada and send her 9-year-old son to college. Police had to sit down with Kieron McEwan and explain to him that his mother was dead. The Daily News reports that the boy sobbed to his uncle, "I only got to spend nine years with my mom."

Daily News columnist Errol Louis describes a Brooklyn neighborhood fed up with heart-breaking violence perpetrated by volatile ignorant young men involved with drugs and with access to guns. "In a neighborhood known for its differences of class, race and religion, Crown Heights is united in its disgust and determination to put things right." Louis quotes Chanina Sperlin, the executive vice president of the Crown Heights Jewish Community Council: "These thugs must be caught," Sperlin said. "Black, Jewish, we must have unity in the community. Enough with the guns. No mercy on them."