The Hershey candy company is under fire for producing a breath mint candy that police say is hard to distinguish from an illegal drug. Philadelphia cops are complaining that a new iteration of Hershey's Ice Breakers product looks a lot like crack cocaine. When we initially read a quote from a local Philadelphia news station––"Even veteran narcotics officers acknowledged that they could not tell the difference between a package of crack cocaine and the breath mints package when placed side by side"––we figured that Philadelphia police must be idiots. Looking at the picture at left, however, we'll have to agree. 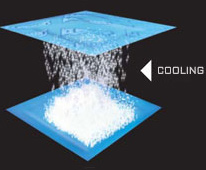 Aside from worrying that Hershey's might be making drug use appear cool––minty fresh and cool––police are concerned that children might mistake a bag of cocaine for a mint and unintentionally ingest it. The Hershey Company denies that there is any intentional resemblance between its product and illegal drugs, pointing out that each of its mints are clearly labeled with the Ice Breaker logo. The new product is called Ice Breakers PACS.

On a somewhat unrelated noted, a very interesting chronicle of the history of Hershey was written a few years ago. "The Emperors of Chocolate: Inside the Secret World of Hershey and Mars" is a revealing look at two differently held companies that are highly regarded as brands around the world. The candy business can be quite bitter.