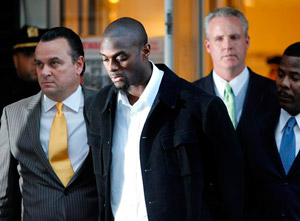 Yesterday morning, authorities from NJ and NY raided the Totowa, NJ home of Plaxico Burress and found a "small cache of weapons and ammo." The Post reports, "If the guns are unlicensed, the embattled wide receiver could face additional charges in New Jersey on top of the felony gun-possession charges he was slapped with after shooting himself in the leg at a Manhattan nightclub last month."

Burress wasn't at home (his wife was) when the Totowa police, NYPD cops, and Manhattan DA's office, who had a search warrant, officials found a 9mm handgun and a rifle, plus ammunition for .380, .45, and .40 guns. They also found "bloodied jeans" as well as a "suitcase full of money" (the suitcase was "not seized, since it was unconnected to any criminal allegations"). The Daily News points out, "It was unclear what the search party was looking for when it entered the home," but "The star wide receiver has said he keeps guns around because he often has a lot of money and bling on him."

Burress's lawyer Benjamin Brafman, who only knew of a rifle being taken from the home, told the Post, "I believe it was registered, but we're looking into that now. I'm not informed at this time that he is facing additional charges. It is not illegal in New Jersey to have a registered weapon in your home." Burress faces felony gun charges—since the gun was not registered and Burress did not have a NYC gun license—in NYC and faces prison time if convicted.