Police arrested 25-year-old Nikole Casimir on Saturday night after they say she rammed a man in a wheelchair with her car in Clinton Hill and then, after an officer arrived on the scene, hit a second man and left him with a fractured skull.

Casimir was behind the wheel of a 2008 Subaru Impreza at around 11 pm when she allegedly hit the first man at Fulton Street and Washington Avenue, and she was out of her car arguing with him when a cop rolled up, according to prosecutors. The timeline and motive is not totally clear, but the officer says he saw Casimir then plow into a man named Harold Reese, sending him flying into the stairway of the Clinton-Washington subway station.

Reese was taken to New York Methodist Hospital where a doctor found he had a fractured skull and a broken vertebra, according to the Brooklyn District Attorney's Office.

Casimir lives in Westport, Connecticut. She is facing a dozen charges, including felony assault and weapons possession, a misdemeanor, with her car being considered a weapon. Because of Reese's serious injuries, the assault charge alone carries a minimum sentence of five years and as many as 25 years in prison. Casimir was released without bail and is due back in court on May 8th. She could not be reached for comment and it was not immediately clear who her attorney is. 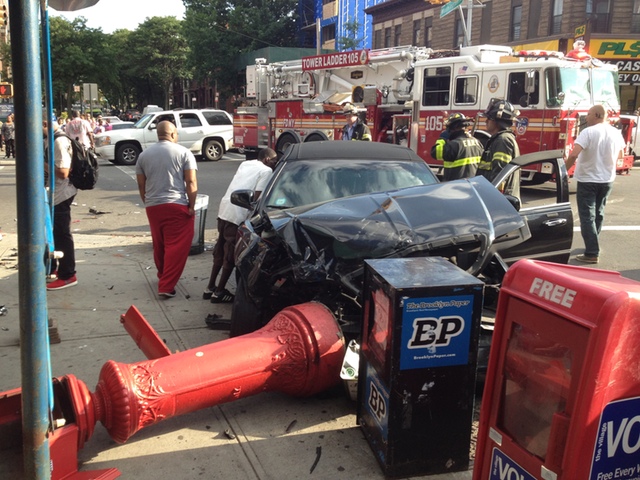 A car crashed into the same corner last August, according to the reader who sent in this photo.

Local activists have repeatedly called on the 88th Precinct to do more traffic enforcement in the neighborhood in recent years. A car crashed onto the sidewalk at the exact same corner last August, according to one reader.

There were 10 crashes that resulted in injuries at the intersection last year, according to city data. Clinton Hill was recently designated a city Slow Zone, meaning it's set to get speed humps, new signage, and other traffic-slowing measures.

The Department of Transportation said last spring it was planning to install a speed hump on Washington between Fulton Street and Atlantic Avenue, but it hasn't yet.

The speed hump is supposed to be installed in the next few weeks, according to a Department of Transportation spokeswoman.

#assault with a motorized weapon
#car crash
#nypd
#vision zero
Do you know the scoop? Comment below or Send us a Tip