The Bronx District Attorney has dropped charges against 19-year-old Jateik Reed, who was seen on video (below) being beaten by police during an arrest in January. Reed faced seven charges, including two assault charges, three drug possession charges, and a harassment charge. All were dismissed this morning, and one of Reed's attorneys, Gideon Orion Oliver, issued a press release today announcing that the DA's office said it had investigated the case and that it could not prove any of the charges beyond a reasonable doubt. However, the status of the D.A.'s investigation into the officers remains unclear. 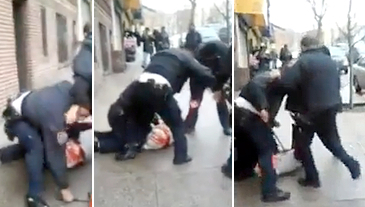 A spokesman for the D.A.'s office would not comment on the investigation against the officers, but said that a statement would be issued by the end of the day. You'll recall that Reed's supporters and attorneys had called on Governor Cuomo to appoint NY Attorney General Eric Schneiderman as special prosecutor to investigate and prosecute the NYPD officers who beat Reed. But the Bronx DA's office had refused to conduct an investigation unless Reed signed an agreement requiring him to give sworn statements about the charges against him.

According to Oliver, this unusual agreement would have also required Reed "to testify in front of a grand jury and waive physician-patient privilege. But given the fact that the DA is prosecuting Jateik—and, more importantly, the symbiotic relationship between the DA and police department—we do not believe the DA is capable of conducting a fair and honest investigation."

As far as Reed's attorneys know, the DA is not conducting any investigation. Spokesman Melvin Hernandez tells us, "We stand ready to pursue the allegation of excessive force but for one reason or another Mr. Reed and his attorneys have chosen not to speak with us, and in order to go further we require more than just the video tape." Oliver, Reed's attorney, fires back:

The DA's office has an obligation to investigate criminal conduct and what's on the video is obviously criminal. They have access to information we haven't had access to, like the police communication and 911 calls, etc. Beyond that, our investigation reveals at least one video tape, surveillance footage, that we believe corroborates that Reed is innocent of the charges against him. It's an abdication of the prosecutor's responsibility to say that because this person who was arrested without cause is unwilling to give up his constitutional rights, we won't investigate.

The agreement they wanted him to sign would have required him to give a sworn and recorded statement on the crimes with which he is charged, which he has the absolute right not to do under the 5th Amendment. It would have also required him to testify in front of a grand jury, wave physician-patient privilege, and disclose the identity and whereabouts of all witnesses, among other things. So basically the DA's office is saying that if he won't wave all rights, we won't carry out ethical obligation to investigate.

It should go without saying that's unconscionable. If what was caught on tape in the video that went viral was anything other than a group of police officers, there is no question that the DA's office would have brought charges against them in a hot minute. So the double standard that's being applied here because it was law enforcement doing the beating is also unconscionable. It would be irresponsible bordering on unethical for any attorney to advise a client to agree to this.

Reed still faces separate charges related to another incident in January. On the day after the beating, the Bronx DA’s office brought a second set of charges against against him, allegedly arising from a cell phone robbery that occurred on January 20th. Those charges are still pending.

#bronx da
#jateik reed
#nypd
#police brutality
Do you know the scoop? Comment below or Send us a Tip