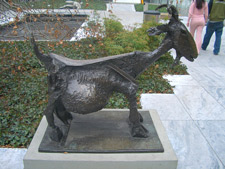 In a desperate bid for freedom and to avoid a date with a butcher's knife, a goat made a break for it in the Bronx. The 25 pound pygmy goat was spotted yesterday afternoon on 141st St. near St. Ann Ave. in the Mott Haven section of the Bronx and police quickly captured it. A worker with Animal Care & Control believes that the animal probably escaped from a neighborhood slaughterhouse.

Police have named the estimated 18-month-old goat Denny, who was described as being a little shy and cold, but otherwise healthy. Denny will be headed to Farm Sanctuary in Watkins Glen, NY today, where he will join a number of other famous four-legged escapees from the City. Last June, cops picked up Lucky Lady, a young lamb who also was believed to have fled a Bronx slaughterhouse. There's also Joey, a goat found wandering around Brooklyn. And perhaps most famous is Queenie, the cow who escaped from a Queens slaughterhouse in 2000 and evaded capture for 20 blocks before being cornered in a playground and shot with a tranquilizer gun.