A stock trader who recently moved to Fort Greene got a taste of Broken Windows policing while playing Pokemon Go in a park last week.

Albert Wang, a former Bank of America and Goldman Sachs analyst who is now an independent trader, said he bought a four-story house in the neighborhood two years ago, and moved in from Tribeca last September after the tenants cleared out. The place lacks air conditioning, so Wang, a self-described nerd and a night owl, went out for a stroll last Wednesday morning at around 1:30 a.m., and brought his phone along in hopes of catching some pocket monsters.

In the park—home to several Pokestops and a Pokemon gym at the Prison Ship Martyrs Monument in the center—Wang said he walked past several people, including four teenagers on bikes, and a guy on a bench eating a sandwich. From the top of the hill—where the obelisk marks the remains of 11,500 American revolutionaries who died aboard floating British prison ships, and now serves as a hub for people to pretend battle cartoon creatures on their smartphones—Wang saw a police SUV and officers talking to someone, but didn't think anything of it.

"I was playing Pokemon Go and just staring at what was going on," he recalled. "An officer...walked up to me and asked who I was."

As Wang learned over the half hour or so that he says it took for four cops to run his ID and ticket him, Fort Greene Park closes at 1 a.m. The ticket, for disobeying a park sign, carries a $50 fine, but it is a criminal summons, meaning Wang can't pay it by mail and must show up to an October court date or be subject to arrest. Wang said that the officer who wrote him up held copies of at least two already-written tickets, and that while he was detained, some cops broke off in search of other rule-breakers. Still, he said he feels unfairly targeted.

I’m an Asian guy. I’m 37 years old, I'm about 5-10, 5-11. I'm kind of a nerd, went to MIT. When I went out for walk...I was wearing a pair of jeans and a white polo shirt. So, while I certainly understand that police officers are doing their jobs—the fact that I feel safe enough walking around at 1,2 in the morning was perhaps a testament to their work—it could very well be that this Asian guy, clean-shaven, bourgeois class—maybe they're thinking, I'm just projecting here, "He seems like an easy mark."

I don't want to imbue that there's some sort of racial profiling, but I do feel like I fit into the demographics that would not fight particularly hard against the officers. In fact, after they gave me the ticket, I said to the officers, perhaps more than twice, "Thank you and have a good night." Which, in retrospect perhaps there's nothing to thank them about. 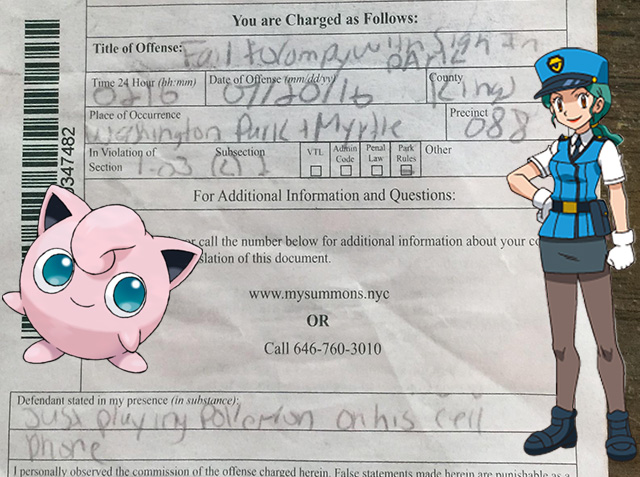 It's a cold world out there for a trainer. (Albert Wang photo, with Jen Chung assist/Gothamist)

Wang also speculated that the ticket blitz in the park was "unusual," and a way of hazing new recruits. He is right in one sense: Wang receiving a summons is unusual, given that the overwhelming majority of so-called quality-of-life summonses that police write are given to African American or Latino people. But tickets for such offenses as public urination, and remaining in a park after (inconspicuously posted, unevenly enforced) official hours are exceedingly common. Disobeying park rules and being in a park after hours were the sixth and eighth most common summonses issued in 2015, and together accounted for about 15,000 of the more than 327,000 written last year.

Missed court dates stemming from these sorts of tickets have led to some 1.5 million open arrest warrants, and an untold number of otherwise law-abiding, mostly black and Latino New Yorkers with criminal records. 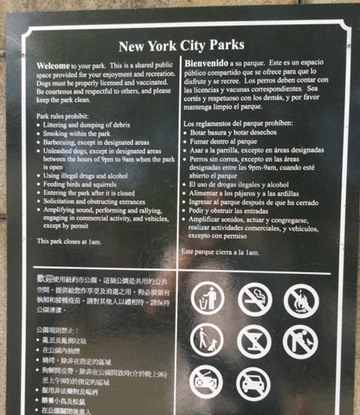 Can you make out the closing time? What about at night? (Albert Wang/Gothamist)

To combat this phenomenon, some City Councilmembers recently proposed decriminalizing several of the most commonly ticketed offenses, including disobeying park rules, so that the summonses would be handled in civil court. The NYPD balked at this, and the legislators revised their bills. The resulting, watered-down versions enacted in June gives officers the discretion to issue criminal summonses and make arrests if, as NYPD Commissioner Bill Bratton put it, "the behavior is egregious or inappropriate." It's unclear what about Wang and his fellow park-goers' cases fit the bill.

Wang lamented the economic waste of expending police and court resources on his transgression, and said going to his court date will disrupt his stock trading.

"I think the NYPD made a joke out of themselves, to be honest," he said, adding, "I thought this was a very draconian approach to a very minor violation."

The entire approach in his case is counter-productive, he said.

"If the duty is to protect and serve...that’s certainly not the way to go about it. For the past five days this event has been bothering me. I haven’t even walked into the park," Wang said. "I’m not saying I’m going to sue the city or anything. But to create this psychological stress it doesn’t seem like it falls into the category of something that protects the innocent citizens."

I noted to Wang that a tourist was mugged while playing Pokemon Go in Central Park during the day, and asked whether it's possible cops spared him a worse fate.

This, Wang said, "would be the same as blaming the victims of sexual assault for the way they were dressed."