The Nassau County police confirmed that one of its officers fired the bullet that killed Hofstra University junior Andrea Rebello during a home invasion early Friday morning in Uniondale. Nassau County police Commissioner Thomas Dale personally informed Rebello's parents at their Tarrytown home, wishing them his "most sincere and heartfelt condolences," before making the announcement at a press conference.

Nassau County Homicide squad Lieutenant John Azzata said that Rebello, 21, had been used as a human shield by ex-con Dalton Smith, with her head in a headlock. Smith, 30, was dragging Rebello out of the house and apparently motioned that he was going to shoot the officers who responded. Smith also allegedly said, “I’m going to kill her."

Azzata said, " [Smith] points his gun at our police officer and at that point [the officer] fires the guns—eight rounds. Seven of those rounds struck our subject. One of the rounds struck our victim." Both Smith and Rebello died.

Rebello; her twin sister Jessica; her sister's boyfriend, John Kourtessis; and their friend Shannon Thomas had just returned home. According to the Daily News, "they left the door open so the boyfriend could quickly go outside to move his car and avoid a parking ticket. Smith, clad in black and wearing a ski mask, saw the open door and burst inside the two-story home at 213 California Ave. at around 2:20 a.m. 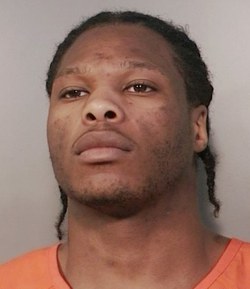 An undated photograph of Dalton Smith

Azzata added, "It appears to be a crime of opportunity... [Smith] was walking the neighborhood and saw the door open and thought there was an opportunity to go in." Smith apparently told the three women to go to the couch. Kourtessis came back in and was made to join them. Kourtessis spoke to the Post, explaining that Smith was waving his gun at them, demanding money more money after the woman offered him the computers and jewelry in the house:

The crook asked who had money in the bank. Shannon said she could get $700 from an ATM. Smith told her to go get it.

Shannon ran from the house, drove off and called 911.

Moments later, in the house, Andrea, Jessica and John heard a noise outside. Thinking Shannon had returned, Jessica went to the door. Instead, Jessica found police officers — so she ran to safety.

“I can’t go back to jail! One of you, get over here,” Smith said, according to Kourtessis’ account.

“So I get up and come over and he puts me down with the gun to the back of my head,” Kourtessis said. “He said, ‘Show them your hands and tell the cops to get out of there.’ Then he does the same to Andrea.”

At this point, the police had entered the house. An officer saw Kourtessis with Smith and then took cover. Kourtessis then ran down the stairs and behind a couch in the living room, yelling, "The police are here." Smith then put Rebello in a headlock while coming downstairs.

Newsday reports that the officer who fired the shots had worked for the NYPD for at least seven years before joining the Nassau County police; he is "out sick and will be monitored and receive counseling." Smith's criminal history begins in 1999, with many robbery arrests; a warrant for his arrest had been issued last month for violating parole.

Hofstra students told the NY Times that while the school's campus was safe, the street where Rebello lived, just south of campus, seemed less secure. One said, "Walking after class after 7 p.m. or 9 p.m., it feels really unsafe to walk outside of campus across Hempstead Turnpike. If you walk around California Avenue and the streets around them, there are streets there that don't have street lamps."

The school's commencement ceremonies were held today; a moment of silence was observed for Rebello. Her funeral will be held on Wednesday.