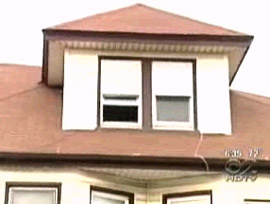 After discovering in the body of a 55-year-old man bound, gagged, and castrated in a Queens apartment on Saturday, police believe that the apartment's tenant, Brigitte Harris, may be the murderer. Initially, it was unclear who the man, Eric Goodridge of Staten Island, was or why he was in the apartment, but the Daily News reports that he was Harris' stepfather and that Harris blamed him for sexual abusing her.

Police believe that Harris mutilated Goodridge after killing him on Saturday afternoon. Then she went to a friend's home on Staten Island, who "called 911 to report an emotionally disturbed person," according to the Post. The police say that Harris had lured her stepfather to her apartment via email, where she "handcuffed him to a chair, gagged him with duct tape and throttled him until he died" (News). One source said, "This is a homicide that had meaning and reason. It is like a movie, let me tell you." Harris remains in a Staten Island hospital.

The reactions of Goodridge's neighbors were strange. Residents denied that he lived in the apartment complex when questioned by the Staten Island Advance and one neighbor said, "Who gives a s---?" when a CBS 2 reporter told him Goodridge was dead. As for residents in the Queens neighborhood where Harris, who works for a private security company at JFK airport, rented an attic apartment, they were more frightened. One told the Advance, "I hope it's not a serial killer that did this, cutting peoples limbs off. All I know is, I'm locking my door tonight."