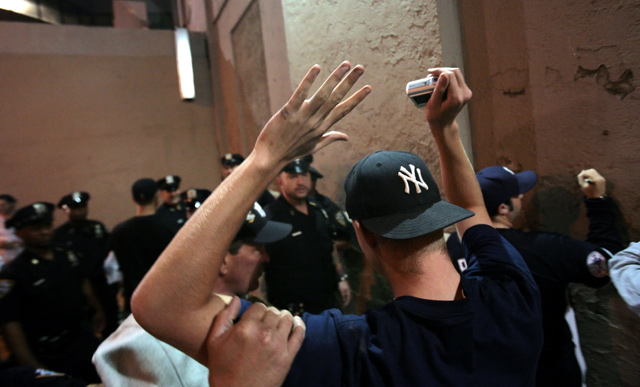 At least 18 baseball fans were arrested after the last game at the old Yankee Stadium Sunday night, as attendees ran amok trying to grab whatever souvenirs they could get their hands on. We're talking precious mementos such as cup-holders ripped off of seats, which can now be yours on eBay! According to the Post, one fan sneaked onto the field after the game and blended in with the groundskeepers, almost managing to steal third base, some priceless grass and sacred dirt.

Yesterday the area outside the doomed stadium was crawling with entrepreneurs looking to cash in on all the nostalgia. Carmelo Paduani, a grown man of 25, was observed at the scene using a screwdriver to scrape loose paint from the exterior wall. He told the Post, "I'm just hanging around getting paint off the wall." Yankee officials say they're going to have to hire a private security company to patrol the area to stop people from damaging it before it can be razed.

Also, a Bronx schoolteacher who attended the last game says he might sue the Yankees after security guards forced him to turn over the stadium's last home run ball to a man from Colorado. Paul Russo, 31, says his rival—known only as "Steve"—grabbed the ball when it landed in the netting above their seats but was unable to dislodge it. Security ordered Steve to release it, whereupon it rolled down into Russo's hands. Russo tells the Post that guards proceeded to "take it from my hand. They grab it, flip it to Steve. I said, 'Whoa! What's going on?'" Yankees spokesman Howard Rubenstein says the team "doesn't have enough details in order to make a judgment."