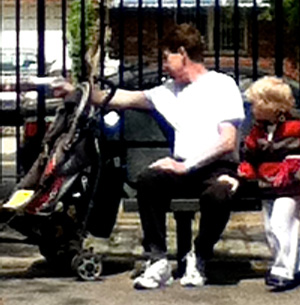 Yesterday, it was reported that a father brought a loaded pellet gun to Ditmars Park in Astoria, Queens and fired it on Tuesday morning. Though Jack Pawlowski aimed it at a tree, parents were alarmed because the playground was full of children—and he gave the loaded gun to his child, who then aimed it at other kids. Now Pawalowski has been arrested.

Parents had called the police about the fake gun and WCBS 2 reports that Pawlowski was "led out of his Queens home in handcuffs Wednesday, with his stunned wife and three young kids looking on. He said nothing as detectives put him into a squad car." Earlier in the day, he had insisted other parents were overreacting, telling the Daily News, "There’s a lot going on in the world — killing kids, stuff like that. Maybe they’re a little paranoid."

Pawlowski had been using a realistic looking silver gun his family bought in Poland. In New York, it's illegal to have realistic fake guns (cops will not hesitate to shoot you if you pull a BB gun on them, too).

City Councilman Peter Vallone was not buying Pawlowski's attitude, "This is really a way to educate people. You cannot run around with a realistic looking gun. It’s against the law, and you could get arrested and actually go to jail."