Port Authority cops are still falsely arresting men in public bathrooms almost 15 years after a jury found that they had a habit of doing so merely on the basis of a guy shaking out the last drops of pee at a urinal, according to a lawsuit filed Monday in federal court.

Legal Aid lawyers are joining forces with a private firm to bring a class-action lawsuit on behalf of men arrested on public lewdness charges at the Port Authority Bus terminal. The lawsuit claims that two named plaintiffs and an untold number of others were "deliberately targeted" based on officers' perception that they are gay or gender-nonconforming, and calls it "a shocking and appalling exercise in unconstitutional bias."

"Millions of commuters in the city have to use public restrooms in the course of their day, and for men to be targeted by unconstitutional arrest practices anytime they're using bathroom at the Port Authority Bus Terminal, that shouldn't happen," said Legal Aid attorney Kimberly Forte. "Men should feel that, going about the normal course of their day, they are safe."

The officers' modus operandi, according to the two falsely arrested men and several others arrested under similar circumstances, is to send a plainclothes officer into the men's bathroom to pretend to urinate next to someone, peer over the privacy wall that would block the view "under any definition of normal circumstances," and in some cases step back to view the target from behind. Then, when the man leaves the bathroom, officers close in and arrest him.

One of the plaintiffs described his experience to the Times in 2014:

"You know how when you have a feeling someone is looking at you?" the man, who asked to go by his first name, Miguel, told the paper. "So I look over and see someone is smiling at me. It was like a smirk."

Port Authority police told the Grey Lady at the time that there had been 60 public lewdness arrests in the bus terminal over the first 9 months of that year.

The two named plaintiffs had no criminal records at the time of their arrests and both repeatedly rejected offers for plea deals, according to the suit. Miguel was found not guilty by a judge following a trial. The other man, a baker named Cornell Holden, had his charges dismissed. Both appeared for several hearings over the course of months before clearing their names. Forte said that in the course of Holden's arrest, other officers referred to Officer Michael Opromalla, the peeper, as "the gay whisperer." He has been listed as the arresting officer in "numerous" similar busts, according to the suit. 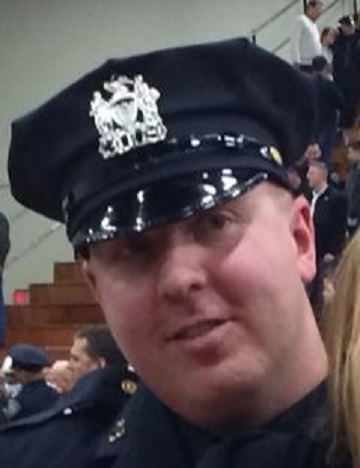 In response to the Times article, City Councilman Daniel Dromm wrote a letter to the Port Authority calling for the "false and apparently discriminatory arrests to end immediately." He wrote in part that he was "deeply disturbed" by the apparent profiling, and, apart from that, "I would like to say how utterly creepy and intrusive such a violation of someone's personal space is. Why you would be putting any resources into patrolling bathrooms to monitor how people urinate is beyond comprehension."

Still, the practice has continued, according to the lawsuit, which seeks an injunction against false arrests and damages for what Forte said could be dozens of men caught in the dragnet. The suit cites another man's arrest under similar circumstances in 2016. His charges were thrown out after he spent seven months fighting them, according to the filing.

A man named Alejandro Martinez sued the Port Authority back in 2003 over his arrest for shaking out his urine in a bathroom at the World Trade Center PATH station. In the course of his civil and criminal trials, Martinez testified that he was one of seven men arrested for public lewdness at the bathroom that morning. One arresting officer, Paul Nunziato, called Martinez a "faggot" and a "queer," threatened to break his teeth when he objected to being arrested, and said the officers needed to meet their quota, Martinez testified. A jury awarded Martinez $1.1 million and found that the Port Authority had a policy of making baseless public lewdness arrests. A judge upheld the decision on appeal, but dropped the award to $464,000, plus $264,000 in legal fees.

"We feel that the driving force of this is so-called quality of life policing in the city of New York...This is a way for the Port Authority Police Department to drive up its numbers," Forte said. "It's a way for them to look like they're cleaning up the Port Authority, when in reality they are targeting men who for whatever reason they perceive them to be gay or gender non-conforming, and in the case of the named plaintiffs, they happen to be black and Latino. Those are the people they picked, for whatever reason."

One of the officers, Shaun Kehoe, was sued in 2013 for allegedly falsely arresting a man who was working at the bus terminal and happened to walk past officers arresting someone in a wheelchair. The charge, obstructing governmental administration, was dismissed after nine months. The lawsuit settled out of court.