The City Council was in the midst of approving two major pillars of Mayor de Blasio's $41 billion affordable housing plan on Tuesday afternoon, when a small group of protesters in the Council gallery cut through the proceedings with shouts of "City Council vote no, MIH [Mandatory Inclusionary Housing] has got to go!"

The protesters represented some of the 40 nonprofit organizations that had formally denounced the Mayor's plan at a rally earlier in the day.

The interruption prompted a brief recess, as councilmembers stood up from their seats, looking towards the balcony where five protesters had superglued their hands together to resist expulsion from the chamber. NYPD and EMTs were called to the scene. No arrests were made, but one protester was hospitalized. According to a fellow protester who documented his arrest, the man experienced back spasms.

Video taken from the balcony by protester Imani Henry of Equality for Flatbush shows, at close range, NYPD officers and City Hall officials attempting to remove the group from their seats. At one point, an NYPD officer grabs a protester from behind, and attempts to push his head under the metal barrier railing separating gallery seats from the edge of the balcony. Identified by the group only as Jermain, the protester on the ground was ultimately taken to the hospital.

Avernetta Henry, 66, of Picture the Homeless, participated in the disruption and witnessed the ejection. "They pulled him to the rail and he fell to the floor and he couldn't get up," she recalled on Tuesday. "They were trying to make him get up and he said, 'I'm hurt.' I shouted down to the council people, 'We've got a man hurt down here.' What happened to freedom of speech?"

Speaking with Gothamist on Wednesday, Henry said that he was also forcefully removed from the chamber by several police officers. According to Henry, he and Jermain were the only black men in the group, and were ejected from the chamber with more force than the others.

"It was clear that there was more force and attention being exerted on [Jermain]," Henry said. "They had him pressed on the railing, and he was being dragged along the railing."

Henry clarified that he was working in a "support role" during the action, and was tasked with filming the planned act of civil disobedience. "When it started getting more rough with [Jermain] I said 'Stop,' and someone came from behind and grabbed me," he added. Henry says that two officers grabbed him and twisted his arm behind his back. "I was screaming, I said, 'You're breaking my arm,'" he recalled, though in the end he did not sustain any serious injury.

A photograph of Henry outside the chamber shows him surrounded by four police officers and two men in suits, one of whom appears to have his hand on Henry's neck. (A City Council source said the men in suits are plainclothes NYPD officers.) The picture was taken by Copwatch activist Jose La Salle. "I was surrounded by them," Henry recalled. "I'm not a big guy. By the time we got downstairs it was ridiculous."

Henry declined to comment on the man who appears to be touching his neck, saying that "the picture speaks for itself." 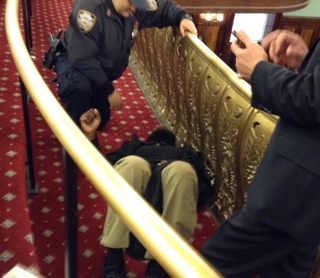 Jermain on the ground in the balcony (via Maureen Silverman)

The Council voted Mayor de Blasio's rezoning initiatives into effect on Tuesday, by a wide margin. Afterwards, the Mayor reiterated his stance that the plan—which will allow developers to build higher and more densely in targeted neighborhoods, in exchange for a percentage of below-market-rate apartments—is radically progressive. "Our new rules say that developers can only build in newly rezoned neighborhoods if they build affordable housing for low- and moderate-income families," he stated. "We won’t let people be pushed aside because they can’t afford this city."

After the protesters were cleared from the chamber on Tuesday, Council Speaker Melissa Mark-Viverito announced that an ambulance had been called, and that she had checked in with the man who had been hurt.

"We understand that this is a very passionate issue, and we do not take away from people who need to express themselves," she added. "We've given a lot of room for voices to be heard, and... as legislators we will not be able to meet the concerns of everyone."

Reached for comment on Wednesday, a spokeswoman for the City Council confirmed that six people were "escorted" from the chamber, and that no arrests were made. The NYPD also stated that there were no arrests made or summonses issued, but did not immediately comment on the photograph of Henry.

#affordable housing plan
#City Council
#civil disobedience
#Imani Henry
#nypd
Do you know the scoop? Comment below or Send us a Tip