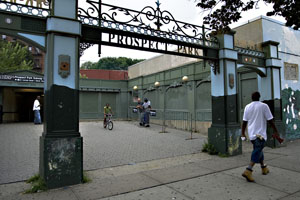 The NYPD Internal Affairs Bureau is investigating an explosive allegation made by a Brooklyn man who says five cops beat him and then sodomized him with a walkie-talkie antenna inside the Prospect Park B and Q subway station. One NYPD source tells the Daily News, "This is a bad one. It looks like one of the cops inserted his radio antenna in the victim's rectum."

Lawyers for the man, a 24-year-old tattoo parlor employee named Michael Mineo, say that he was smoking a joint on his way to the subway at around 12:30 p.m. on October 15th when police confronted him. Mineo fled to the station, where the cops apprehended him by the turnstile. According to his account, an officer placed his knee on Mineo’s neck as others punched and kicked him. While he was held down, Mineo says one officer pulled down his pants, while another shoved a police radio antenna into his rectum. He also claims one of the officers yelled, "Don’t do it! Don’t do it! No, no, no, no."

NYPD spokesman Paul Browne tells the Times that investigators interviewed two civilian witnesses, whom he says contradicted the allegation: "Witnesses said they heard him say two things, that he was being sodomized and Tasered, and they saw neither." But a police source tell the News that one witness did see Mineo's bare buttocks. In a statement, Browne added that Mineo's complaint is being investigated, but "his assertion that he was sodomized is not supported by independent civilian witnesses on the scene."

As part of the inquiry, an unidentified investigator tells the Times that police officials had removed an item, which he would not identify, from one of the officer’s lockers and sent it for testing. The Times also notes that in 1987, Mineo's lawyer, Stephen Jackson, was a lawyer for one of the advisers to Tawana Brawley, a 15-year-old black girl from Wappingers Falls, N.Y., whose claims of being abducted and raped by a group of white men were found to be a hoax. In this case, Mineo is white and the police involved in the incident are reportedly white, black and Hispanic.

And the News points out that Mineo has been arrested four times in the past four years, most recently in April on assault charges. That arrest took place at the tattoo parlor after Mineo and four others allegedly kicked and punched a man, bloodying his head and knocking out a tooth. Another victim in the confrontation says Mineo struck him with a wooden stool, according to the Times. That case is still open.