Copper Capers on the Rise in Brooklyn 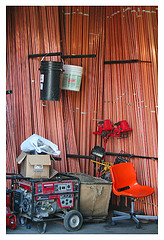 Silver and gold are so last season, if you're a trendsetting criminal -- you know it's all about the copper these days. And where better to find it than in brownstone Brooklyn? The Brooklyn Paper reports:

At least four heists of the once-cheap electrical conductor have been pulled off in Brownstone Brooklyn since June, and a few others were foiled when the cops caught the bad guys red-handed before they could make off with their ill-gotten orange gold.

It’s no wonder copper is attracting thieves. Stolen pipes and wiring can be sold to scrap metal dealers for $3–$4 per pound — and compared to other valuables, it’s relatively easy to haul it away from unguarded construction sites and abandoned buildings.

This all sounds eerily similar to how the Greenpoint Warehouse ended up burning down. Construction crews are being careful to keep a watchful eye on their supplies, and one security guard even said "would-be thieves have offered him bribes to look the other way while they rip off the construction sites he’s guarding." The NYPD is also cracking down on the not-so-smooth criminals by assigning cops to the copper beat (some make regular visits to construction sites to make sure they're locking up their goods at night).

Some of the latest victims: the Red Hook Ikea, the armory on Eighth Avenue at 14th Street in Park Slope and a commercial building on Sterling Place.

UPDATE: A reader wrote in to tell us, "Copper has been disappearing off movie sets in NY for years The largest thefts I am aware of more recently are from I Am Legend and The Departed which used the Marcy Street armory as stages. Thousands of dollars worth of copper was stolen from that location."

Photo of copper tubes in Brooklyn via Emily Rawling's Flickr.

#brooklyn
#brooklyn paper
#brownstone brooklyn
#caper
#copper
#crime
#eighth avenue
#flickr
#I Am
#i am legend
#nypd
#park slope
#red hook
#Red Hook Ikea
#Sterling Place
#The Brooklyn
#the brooklyn paper
#the departed
#The NYPD
Do you know the scoop? Comment below or Send us a Tip