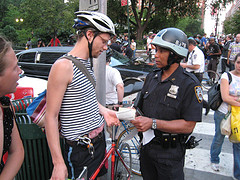 Critical Mass, which came to New York around 1993, hasn't always been a cause for concern amongst the city's police. After 2004's Republican National Convention coincided with that month's Critical Mass in Manhattan, things changed. The ride has taken a more political tone and there's often an air of protest circling it.

The ever-changing leaderless group has been in and out of the court with arrests being called in to question. Do the police have the right to arrest cyclists and take their bikes? Should there or shouldn't there be a need for a permit? The Villager talked to one of the cops who is at each Critical Mass, here is some of what he had to say:

Q. It’s the last Friday of the month and that evening is Critical Mass. What’s going through your mind?

A. Generally speaking, we know it’s going to be a night with a lot of confrontations, somebody’s going to be unhappy, there’s going to be some form of enforcement action. In the beginning it was arrests that were done, and that was when Critical Mass decided to make itself a problem in the eyes of the department, before the R.N.C., especially.

We’re expecting we’re going to arrive and that there’s going to be the usual epithets, “police state” shouts and chants and that we’re all nazis, so we kind of brace ourselves mentally for that.

There were no questions asked about the recent Reverend Billy incidents, but when asked if he had advice for the Critical Mass bikers (who he described as "idealists"), he pleaded, "Somebody, just once, get the permit — it’s only $45 — and do an organized ride. Get as many people as you possibly can, 10,000 bicyclists, for the ride. But get the permit first, and watch what happens. You’ll get to ride your route, they’ll get any route they want, short of riding on the F.D.R. Drive or the West Side Highway. There’ll be a detail of officers to hold traffic. They will ride unencumbered, unhindered, unsummonsed and unchallenged. There’ll be no issues. There’ll be no problems. And even if they don’t get the entire street to themselves, they will have at least two lanes reserved for them."

We wonder if anyone is willing to put up $45 to test this out. And to get a biker's side of the story, we interviewed Matthew Roth in 2005 -- he's a regular Critical Mass rider and part of Time's Up, an organization the interviewed officer thinks organizes the monthly ride.