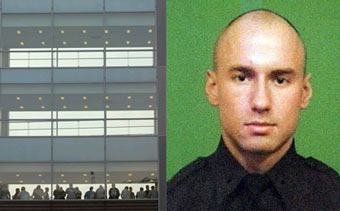 Twenty-three-year-old police officer Russel Timoshenko died yesterday at King County Hospital, five days after being shot twice in the face during a Monday traffic stop in Prospect Lefferts Gardens. Doctors took him off life support after finding he had no brain activity yesterday afternoon. KCH director of trauma service and surgical critical care, Dr. Robert Kurtz, was visibly upset as he reported Timoshenko's death. From Newsday:

Kurtz, who choked up, said the case "affected us emotionally as well as professionally."

He said Timoshenko had two gunshot wounds that entered through his face and mouth, cutting across the top of the spinal cord right under the brain.

"From the second those bullets hit, he was unable to breathe and unable to move a muscle in his body," he said, adding that the officer had no oxygen to his brain for 15 to 20 minutes before arriving at the hospital, driven by a 71st Precinct detective.

"The activity in his brain ceased, and that's death in New York State," Kurtz said of his condition then. The family sought second opinions. "The family were desperate. They reached out. This was their only child. And for this mother to have lost her son like that, it brings tears to my eyes," he said.

Police Commissioner Ray Kelly said, "Officer Timoshenko made the ultimate sacrifice with unflinching bravery and dedication to duty. We'll never forget him, and we're more committed than ever to seeing to it that those responsible for this crime are prosecuted to the full extent of the law." 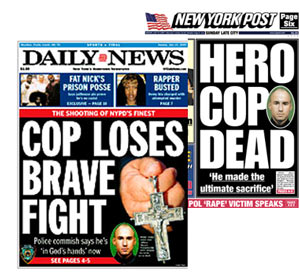 Now the three suspects in the shooting, Dexter Bostic, Robert Ellis, and Lee Woods, face first-degree murder charges. The question remains whether the Brooklyn DA's office will want to cede the case to federal prosecutors so they can pursue the death penalty.

Ellis is being held in a Nassau County Jail, while Bostic and Woods are held at Rikers. Corrections officials are separating the trio and segregating them from the general prison population. A corrections official told Newsday, "We don't want them to have any contact among themselves. We don't know about their gang affiliations and who else might be in the facility that knows them or that they know."

Many police officers, including Timoshenko's partner Herman Yan (Yan was also shot during the traffic stop, but had been released on Tuesday), paid their respects at Timoshenko's hospital room yesterday. The NY Times has a story about the kinship between doctors at Kings County and cops from the 71st and 76th Precincts; Timoshenko and Yan were from the 71st, and Yan told the Times he stopped by KCH at least once a week, "Even a mother that reports their child missing, after we search their building, we’ll call in and say, ‘Sarge, is it O.K. if we swing by the hospital and see if she’s there?’ ”

And Mayor Bloomberg said, "While I can't know the anguish they are going through, I want Russel's parents Leonid and Tatyana to know their son was a hero. It does not provide any consolation, but I am proud of the investigators who worked so swiftly to apprehend those that committed this detestable and cowardly act."