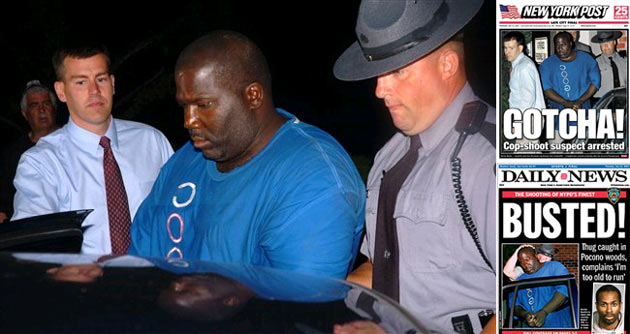 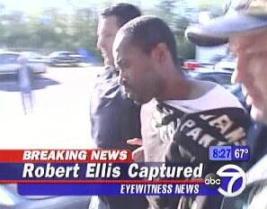 The NYPD has announced that both suspects in the Brooklyn traffic stop shooting of two police officers have been captured. Last night, Dexter Bostic was arrested as he and the other suspect Robert Ellis were walking along Interstate 80 near Stroudsburg, Pennsylvania.

Ellis managed to run into the woods, but Pennsylvania and NYC authorities were able to catch up to Bostic, who said, "I'm too old to run." Police Commissioner Ray Kelly had said, "Bostick got winded. You have to stay in shape. Ellis happened to be faster." No, Commissioner Kelly - better that suspects are out of shape so the police can catch up!

Ellis was captured this morning at 8AM. WABC 7 described him as being "surrounded on an uphill incline, in some brush." The Post reports that the police found him after finding footprints and food wrappers. The story on how the police found the pair is fascinating - they got someone to drive them from Queens to Pennsylvania in a circuitous route:

The driver, whose name the police would not release, said that he had driven Mr. Bostic and Mr. Ellis to Pennsylvania using a four-state route that went through Long Island, across Long Island Sound on the Port Jefferson ferry to Bridgeport, Conn., and then to Tarrytown, N.Y., early Monday, Mr. Kelly said. There, the driver said, he stopped and bought tuna fish, crackers, peanut butter and water.

Later on Monday, the men continued westward through New Jersey to northeastern Pennsylvania, and the driver dropped the two suspects off on an isolated road about 14 miles from where Mr. Bostic was caught on Wednesday. The driver returned to his home in Queens, where his brother, a city police officer, learned of his activities and persuaded him to tell the authorities, officials said.

From the Daily News:
"They told the schmo who drove them that they expected to be in hiding for 60 days," a police source said.

When they got to Pennsylvania, the suspects had a change of heart and demanded the pal drive them to South Carolina, where Bostick has family.

"F--k you, get out of my car," the leery driver told them before heading back to New York.

A different driver called the police saying that the men were near the highway. Newsday says police officers from NYC and Pennsylvania exchanged high-fives after Ellis' capture, "but reaction was far more muted" at the hospital where police officer Russel Timoshenko is in critical condition. Brooklyn assistant district attorney Anna-Sigga Nicolazzi noted Timoshenko's extensive injuries - brain damage, paralysis, inability to breathe on his own - during the arraignment of Lee Woods, who allegedly drove and dumped the stolen SUV during the shooting. Police officer Herman Yan, shot in his arm and chest, suffered "extensive blood loss." Mayor Bloomberg said, "I continue to ask all New Yorkers to pray for Officer Timoshenko, who remains in critical condition. I hope the fact that the suspects are now in custody and on their way to facing justice in New York City will provide some small measure of relief to the Timoshenko family during this terribly difficult time.''

Woods, who was charged with attempted first-degree murder, two counts of aggravated assault on a police officer, weapon possession, unauthorized use of a vehicle, evidence tampering and hindering prosecution, initially said he wasn't in the car during the shooting but then his lawyer admitted his client was there, adding, "My client is not alleged to have actually pulled the trigger. There is nothing in here to suggest he intended to harm anyone. He was simply there at the time." Another possible twist: Wood is a suspect in the recent murder of Queens rapper Stack Bundles.

An extradition hearing has been scheduled for Bostic and Ellis for this afternoon. The Daily News looks at the anguish of Timoshenko's family and the NY Times notes that the Poconos seem to be a place for criminals to flee. And the Daily News' Michael Daly writes that the .45 automatic gun used to shoot Timoshenko in the face was traced to Virginia.