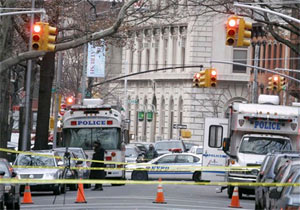 Jose Rivera, who shot at a car full of undercover cops, hitting one of them, was sentenced to 16 years in jail. In February, while driving in Park Slope-Prospect Heights, Rivera thought that the cops were giving him a dirty looks and yelled at them, "You got a beef?" and then fired. The police fired back and later, Rivera's police officer wife seemed to try to cover up the shooting by parking their bullet-ridden car far from their home.

The police officer who was shot, Andrew Suarez, gave a victim's impact statement, saying, "Your true judgment day will come when your life expires from this Earth and you will be judged by God, and when he asks you to explain what you've done, you will be sent straight to hell. And you won't be alone - you'll be accompanied by your wife, who helped you commit this heinous crime."

Rivera originally faced 25 years for the attempted murder of a police officer, but Suarez agreed to a plea deal with a lesser sentence. Apparently the judge believed that Rivera truly did not believe he was shooting at a car full of cops. Rivera's wife, Jacqueline Melendez-Rivera, still awaits trial; Patrolmen's Benevolent Association President Patrick Lynch called her a "criminal and a mope" for betraying a brother.

Perceptions and emotional reactions while driving also play into this week's road rage killing of an unarmed man by a police officer. The incident is now raises questions about the off-duty drinking habits of police officers.