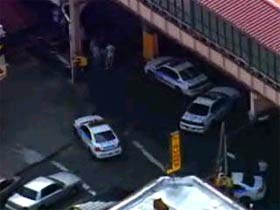 Police officer Annmarie Marchiondo, the 17-year NYPD vet who was shot during a Friday night confrontation with convicted felon, has been recovering at St. Barnabas Hospital in the Bronx. Marchiondo was shot three times (in the hip, ankle and foot), and her husband said, "I'm just happy she's OK...She was almost ready to retire."

The Friday night shoot-out occurred at the 176th Street No. 4 station in Mount Hope. Marchiondo and two other cops, all in plainclothes, had stopped three men who were riding between train cars. One of the men, Juan Calves, pulled gun. One of the other men, Anthony Vasquez, spoke to the Daily News about the exchange.

Calves wrapped his arm around the neck of transit cop Annmarie Marchiondo and aimed his 9-mm. pistol at her two partners.

"He pointed the gun out, saying, 'Nobody move, nobody move,'" Vasquez told the Daily News yesterday.

Marchiondo "was on her knees, covering her head. She was going, 'Oh, God! Oh God!'

"Shots ricocheted everywhere - one zinged by my ear. I could hear the empty shells clinking and clanking on the ground.

"I thought I was done. I was waiting for my bullet."

At least 18 shots were fired by Calves and the cops (it's believed that at least 5 shots were fired from Calves' gun) and Calves was shot dead. Vasquez said, "He was dead as a doornail. There was lots of blood [and] his mouth was open. You could see the bullet holes." Vasquez added that he was riding between train cars because there were no seats and that he "is a recovering drug addict and has prior arrests for drug-related crimes." He was released by the police.

Police are investigating whether Marchionodo's injuries were the result of friendly fire. Calves is described as a career criminal, who served 13 years for robbery and killed a man during his stint in Attica. The NYPD emphasized to Newsday that Marchiondo was "doing much better," noting "she was shot three times, so it's not a small thing."