Cop Kills Girlfriend Then Himself in the Bronx 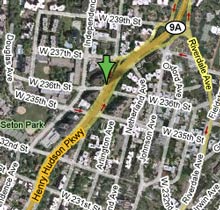 Police are investigating the murder-suicide of an 18-year-old woman and a 40-year-old police officer. When 7-year veteran officer Fred Maselli didn't show up for work at the 34th Precinct, his colleagues were sent to his apartment at 3611 Henry Hudson Parkway West to investigate and found Maselli's body as well as the blood-soaked body of Shirley Fontanez.

Fontanez, who had a 3-year-old son and had been dating Maselli for two years, was shot three times in the stomach and twice in the head. Maselli, who had two children from a previous marriage, was found shot in the head, with a gun nearby. It's believed they died on Sunday, as a neighbor said he heard shots Sunday morning. Izzy Marcus, who was friends with Maselli, told the Post, "I heard, Pop! Pop! I heard five shots. I heard them very clear," but he thought they were from kids.

Fontanez's mother wants justice for her daughter. According to the Daily News, Maria Espinoza said that her daughter and Maselli had been dating since Fontanez was 16, "She used to go to the precinct with him. Everybody knew about the relationship, but they covered it up." She added that Fontanez, who had passed the police test and was interested in becoming a cop, was going to leave Maselli, "He killed her over jealousy. I can't believe he took my daughter like that. I knew him for years."

The NY Times spoke a friend of Fontanez's, who said, "I was like, ‘Why are you still with this guy?’” but Fontanez responded, “Because he will kill me.”