A 22-year-old man with a "learning disability" was fatally shot by the NYPD in Bushwick yesterday afternoon. Police say Rexford Dasrath "lunged" at one of the officers with a knife, seen here, outside 894 Hart Street at approximately 3 p.m. The deadly altercation unfolded after uniformed officers arrived at the location in a marked vehicle—the Times reports they were responding to a 911 call about a man threatening the caller with a knife. Upon arrival, Dasrath allegedly banged on the patrol car window with the knife, and threw a bottle at a taxi. 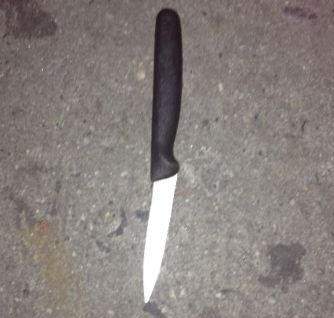 Police say the officers repeatedly ordered Dasrath to drop the knife, at which point he allegedly lunged at one of the officers, who "discharged his weapon striking the male in the torso and left hand." Dasrath was taken to Woodhull hospital, where he was pronounced DOA.

One police source tells the Daily News Dasrath had five bullet wounds, "though some may have been exit wounds." The officers remain unidentified and police say there has been no change in duty status for them.

“He turned around and chased the cops, and they shot him, one witness tells the Times, adding that Dasrath was about five or six feet away from the officers when he was shot. Another witness who works at a nearby beauty salon tells the News, "The police were trying to calm everyone down. People kept yelling, ‘Why would you shoot him that many times in the chest?’ " A neighbor of Dasrath's mother added that "his mom said he’s slow, that he has a learning disability."

#bushwick
#nypd
#police shooting
#Rexford Dasrath
Do you know the scoop? Comment below or Send us a Tip