Cop Killing Suspect In Custody After Apparently Shooting Himself In Queens

The man accused of fatally shooting a Nassau County police officer as well as a driver on the Queens-Nassau County border was found last night. The authorities say Darrell Fuller, 33, was found with gunshot wounds in Jamaica, Queens—and the wounds appeared to be self-inflicted. 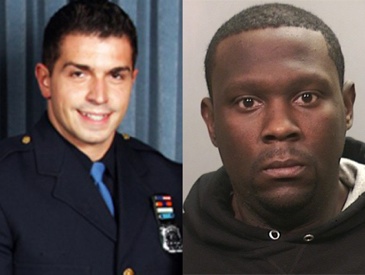 Just after 11 a.m. yesterday, Nassau County police officer Arthur Lopez, 29, and his partner, Clarence Hudson, pulled a silver-colored Honda that left the scene of an accident at Northern Boulevard and Cross Island Parkway. According to Newsday, "The car had blown-out tires and was on its rims. It left the parkway at Jamaica Avenue, headed west and turned left at 241st Street and came to a stop. Lopez approached the Honda and exchanged words with Fuller. Fuller got out of the car and shot Lopez."

Hudson rushed to aid Lopez, and Fuller allegedly fled in the Honda before abandoning it on the parkway. Then Fuller allegedly carjacked Brooklyn resident Brian Facey, 52, at gunpoint and then fatally shot him. Facey had told his daughter on the phone right before being killed, "Someone is chasing me."

Seven hours later, the NYPD responded to a 911 call about gunshots in Jamaica, at 173rd Street and 111st Avenue. When cops approached a red minivan (which had been reported stolen), a wounded man allegedly said, "I’m Fuller — the guy you’re looking for."

Fuller is at Jamaica Hospital in "guarded" conditions. The Post reports, "It’s unclear at what point he shot himself while fleeing; police have yet to recover the gun, sources said... Sources said Fuller had just left a doctor’s office after receiving dialysis because of a bad kidney when he first got into the hit-run." Fuller is a convicted criminal: He served four years for attempted murder in 2005, and, NBC New York says, "was jailed again in 2010 after violating his parole, but was released in May 2011."

Nassau County Executive Ed Mangano did not think Fuller should have been walking the streets, "[Lopez] leaves grieving parents ...you should hear the screams of his mother. He lost his life to a cold-blooded murderer. One could only wonder how an animal like this was roaming the streets with his rap sheet."

An elderly neighbor of Lopez's told Newsday, "Oh, God. It breaks my heart. He was such a nice fella." Lopez grew up in Flushing, and another friend remembered, “To see him grow up into a teenager, an adult…it really breaks my heart, it really, really breaks my heart. I hope he’s at peace now and he’s away from the bad guys. Only the good die young." Facey's family in shock; his sister-in-law said, "I just know he doesn't deserve this. He's too good, too much of a good person, bothers nobody , it's just a tragedy."