The man who fatally shot two NYPD officers as they sat in their squad car in Bed-Stuy on Saturday told a pair of pedestrians to follow him on Instagram and pay attention to what he was about to do. At a press conference yesterday, NYPD Chief of Detectives Robert Boyce told reporters that before the shooting, Ismaaiyl Brinsley had stopped two men on the street in Bed-Stuy, asked them if they were affiliated with a gang, and told them, "Watch what I'm going to do." Within minutes, he'd killed Officers Wenjian Liu and Rafael Ramos.

Earlier in the day—which began with Brinsley shooting ex-girlfriend Shaneka Thompson in Maryland—Brinsley had boasted on Instagram: "I'm Putting Wings On Pigs Today. They Take 1 Of Ours…..Let's Take 2 of Theirs #ShootThePolice #RIPErivGardner #RIPMikeBrown This May Be My Final Post." After killing the two officers, he fatally shot himself in a nearby subway station.

"Most of his postings and rants are on the Instagram account, and what we’re seeing from this right now is anger against the government," Boyce said yesterday, adding that there were "other postings as well, of self-despair, of anger at himself and where his life is right now." 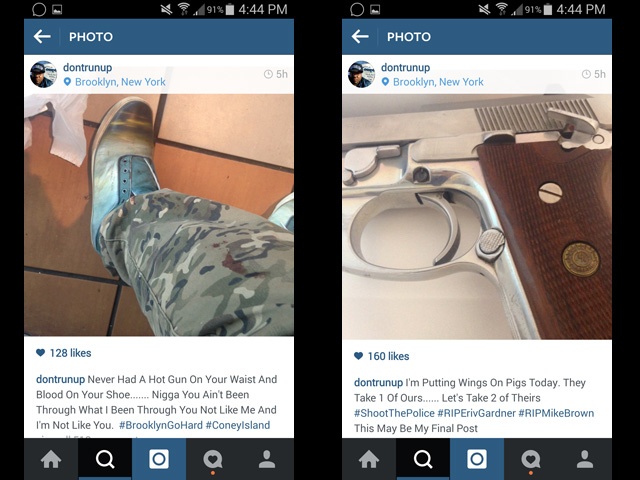 Brinsley, who was transient, had been arrested over 19 times for assault and theft, and spent two years in prison for firing a stolen gun in public in Georgia. Police say he tried to hang himself a year ago, and he told a judge in 2011 that he had been treated for mental illness. His mother resides in Crown Heights, and a neighbor tells the NY Post, "Her son was troubled. She felt like he got away from her years ago. She feels terrible about what he did and now he’s gone. She lost a son also."

Brinsley's family reportedly feared him, and Thompson, his ex-girlfriend, didn't want to have anything to do with him. Brinsley allegedly entered her apartment Saturday morning with a key he was not supposed to have, and then shot Thompson in the stomach during an argument. She is currently in stable condition and expected to recover. Her mother says that after the shooting, Brinsley—en route to NYC—called her and told her it was an accident.

Baltimore police tracked Brinsley through the cell phone he stole from Thompson after the shooting, and Thompson's mother alerted investigators to Brinsley's online threat to kill police. According to the Times, "At 2:10 p.m., Baltimore County authorities reached the 70th Precinct, near where the signal had been detected, and said they had faxed over a wanted poster of Mr. Brinsley. It was not clear if the fax was received. Police Commissioner William J. Bratton said on Saturday that it did not show up until about 2:45 p.m."