The police officer killed when the van he was riding in crashed in the Bronx was a rookie cop who just joined the force in January. Michael Williams, 25, was ejected from the van when it hit a jersey barrier on the Bruckner Expressway at 5:08 a.m. 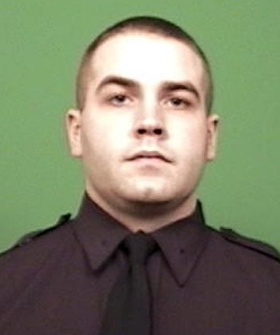 The van was carrying nine police officers from the 47th Precinct to Manhattan, where they were going to help out with the People's Climate March and other events related to the United Nations General Assembly. According to police, Williams was ejected from the right rear passenger seat window. A police source told the Post that Williams wasn't wearing a seat belt—and many of his colleagues weren't either: "At least seven [of the cops] were flying around like rag dolls."

Williams, the son of a longtime Ulster County police officer, was pronounced dead at Lincoln Hospital, where Mayor Bill de Blasio said, "It’s a very sad day for New York City... We lost one of our finest and we lost one of the newest members of the finest, and that hurts even more." He added, "He was assigned here to a tough precinct. A precinct where there is a lot of work needed. He was part of the team that was turning things around. I know that was a source of pride."

The crash occurred near Bryant Avenue. Officials tell WABC 7 that "the vehicle, headed westbound on Bruckner Boulevard, changed lanes and for some reason, the 2009 Ford collided with the barrier and skidded about 90 feet. Williams, who was sitting in the last row on the right side, was ejected and suffered severe trauma to his body."

And The NY Times reports, "Investigators were looking into the circumstances of the crash, which did not involve any other vehicles. Among the issues being examined: how fast the van was going as it approached the sharp left turn near Bryant Avenue and whether the officers on board were wearing seatbelts, as required. Investigators were also performing mechanical tests on the van... All officers must wear seatbelts when on duty, a policy that dates back to William J. Bratton’s initial tenure as police commissioner in the mid-1990s amid a rash of on-duty driving deaths and injuries."

Police Commissioner Bill Bratton said, "We’ll certainly look to see weather conditions, speed circumstances seatbelt issues. So that will all be part of the investigation as it goes forward."

Dozens of police officers lined up outside of Lincoln Hospital to salute the coffin carrying Williams' body.

Two officers were taken to St. Barnabas Hospital, two were taken to Jacobi Hospital and four were taken to Lincoln Hospital. One officer, Francine Devalle, 29, was hospitalized overnight; her cousin told the Post that she was fine, but had cuts, "Mostly she’s tired. laying there resting. … She just remembers everyone screaming."

#bronx
#Bruckner Expressway
#fatal crash
#MIchael Williams
#rookie cop
Do you know the scoop? Comment below or Send us a Tip