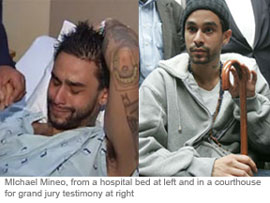 Almost two months after a 24-year-old man accused cops of beating him and sodomizing him on a subway platform, a grand jury has indicted three police officers involved. While the indictment has not been officially communicated to lawyers, reports say that Officer Richard Kern was indicted for assault, while two other cops face lesser charges.

Initially, the NYPD denied that any officers had assaulted Mineo, but the Brooklyn DA's office empaneled a special grand jury. Mineo's story, of being stopped by police, chased into the Prospect Park subway station (Mineo was smoking pot and didn't want to be caught) and assaulted), was bolstered when a transit cop testified to the grand jury that he saw Kern place his metal baton on Mineo's buttocks and run it from side to side as Mineo was being handcuffed.

The Post spoke to Mineo, a tattoo parlor employee, yesterday. Mineo, who suffered extensive injuries, was glad to hear of the indictment, "Now they do believe me. I'm happy for the way this is moving along. I'm looking forward to my day in court... [Kern] doesn't deserve to be on the street... I want him to go to jail." Mineo also said of the transit cop who corroborated his story, "He's a good dude. I appreciate it because without him, I would still be in limbo."

#michael mineo
#nypd
#police brutality
#police officer
#richard kern
#subway sodomy
Do you know the scoop? Comment below or Send us a Tip