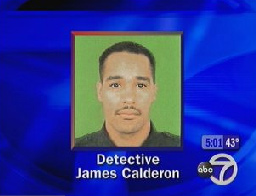 An NYPD detective was arrested in the breaking up of a Bronx drug ring this week. The bust was comprehensive and prosecutors are alleging that officer James Calderon used his inside knowledge of police activities to enable crack and heroin dealers to operate with relative impunity.

James Calderon was a 13-year veteran of the force, but is now being accused of acting as an agent for Jorge and Luis Mendoza, Bronx drug dealers who allegedly paid Calderon. The capture of Calderon was relatively mundane.

Investigators learned of his trips after Detective Calderon came under suspicion in May 2006 when he tried to retrieve an impounded vehicle from a precinct house in the Bronx that was later found to contain a stash of heroin, law enforcement officials said.

One of the Mendoza's cars was impounded because it lacked registration, and a kilo of heroin was found inside. Calderon was arrested after he attempted to get the car back at the 44th Precinct in the Bronx. Calderon says that this is all a big misunderstanding:

Calderon could face up to 25 years in jail if convicted. He worked at the NYPD's narcotics division before being reassigned to a courthouse security division.