Cop Attacked By Hatchet-Wielding Man Is In Critical Condition

The police officer who was struck in the head multiple times by a hatchet-wielding man yesterday is in critical but stable condition. Officer Kenneth Healey, who has been with the NYPD for just four months, is at Jamaica Hospital Medical Center; a witness said, “The cop was bleeding, like, pretty horribly."

The attack occurred at the intersection of Jamaica Avenue and 162nd Street in Queens, right around 2 p.m. Police say that a freelance photographer had asked four uniformed police officers from the 103rd Precinct "to pose for a picture. As the officers were standing together, a male, who has not yet been positively identified, charged at the officers with a hatchet in his hand. Unprovoked and not speaking a word, the male then swung at one of the officers with the hatchet, striking his right arm. After striking that officer, the suspect continued swinging the hatchet, striking a second officer [Healey] in his head causing him to fall to the ground."

The two other officers opened fire on the suspect who fell to the ground and died from his injuries. The cops' shooting hit a 29-year-old female pedestrian in the back, who is now recovering from surgery. The police released video of the suspect, who was identified by the Post and Daily News as 32-year-old Zale Thompson.

According to the Post, Thompson was "a 'scholarly' but 'weird' recent convert to Islam." The Daily News reports, "Police are investigating the possibility that the attacker had links to terrorism. A Zale Thompson on Facebook is pictured wearing a keffiyeh and had a recent terrorism-related conversation with one of his Facebook friends, according to a police source... It’s not believed that the photographer who asked the cops to pull together was working with Thompson, [Police Commissioner] Bratton said."

Police also released a photograph of the hatchet, describing it as a metal tool, "approximately 18 and ½ inches in length." 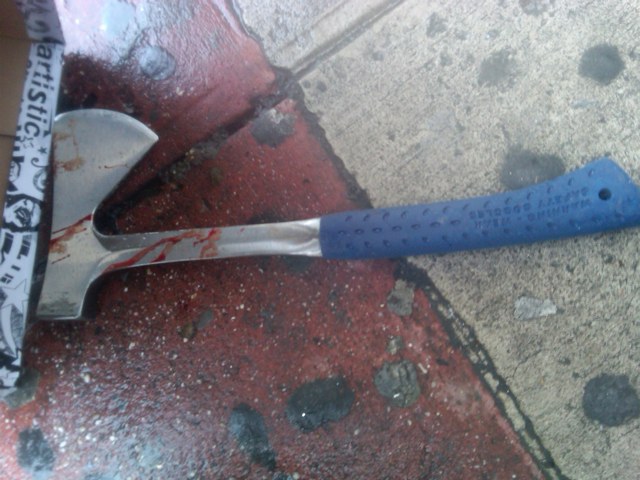 Healey's skull was fractured in the attack, and the NY Times talked to a witness who said: "'His head was split open from here to here,' said Mick Jones, 52, tracing a finger from his forehead to the back of his head. 'His hat probably saved his life.'"