Cop and Girlfriend Arrested for Pimping Out Teens 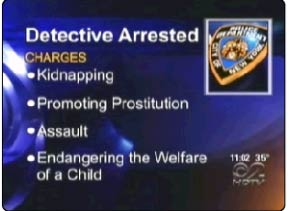 Queens DA Richard Brown announced an off-duty NYPD detective and his girlfriend were charged with promoting the prostitution of a 13-year-old Brooklyn runaway. Brown said, “This case is every parent and every child’s worst nightmare – made even more frightening by the fact that one of the defendants is a police officer who swore to uphold the law and protect the community he serves.”

Detective Wayne Taylor and a woman he claims is his wife, Zelika Brown, were also accused of pimping other teenage girls. They were arrested in Queens, per the Daily News, "at a Holiday Inn near JFK Airport where they had ordered a prostitute to slap the [13-year-old] for talking to clients too much."

Apparently the 13-year-old, after running away, was found by someone who then "sold" her to Brown for $500, to work as a prostitute. Some details from the Queens DA's press release include the allegations that Taylor told the 13-year-old to say she was 19 if asked, to charge $40 for oral sex and $80 for sexual intercourse, and that Taylor and Brown beat her for not "earning enough money." Taylor also told her that she'd be sent to work the streets if she didn't earn enough and that there was an alarm on the house if she tried to leave.

The girl was held in Taylor and Brown's home in Jamaica, Queens between January 10 and January 27, until they "sold" to another pimp on Long Island, where she ran away ran away and told the police. Taylor had been targeted by NYPD Internal Affairs for drug activity; he had previously worked in narcotics but was working on modified detail at in the Bronx housing bureau. Both Taylor and Brown deny the charges. A third person, a 17-year-old, was arrested for assault and promoting prostitution.